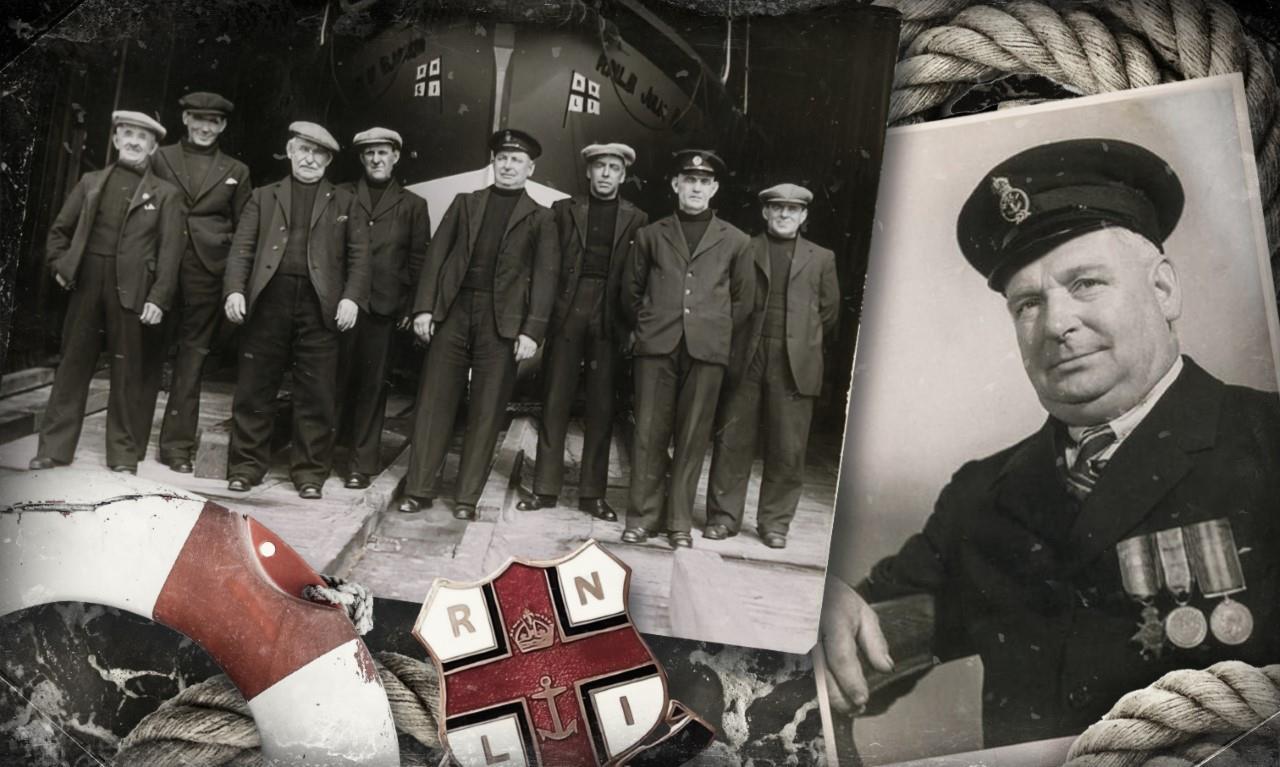 It was the North East Scots who sailed through the teeth of a gale to rescue sailors in distress – then, once they had made their first voyage, continued their missions of mercy again and again and even.

A blizzard raged throughout the repeated efforts of RNLI volunteers from Peterhead as they faced a series of grueling challenges from 23-26 January 1942.

Yet despite the appalling conditions and storm-tossed seas one later described as “a nightmare”, their resolve to help those in peril never wavered as more than 100 men marched been rescued.

As a result of their work, coxswain John B McLean was awarded the Lifeboat VC.

It was the first time in 104 years that such an honor had been bestowed on a lifeboater in Scotland.

The Duke of Montrose, who visited the Blue Toon that summer to celebrate the crew who ventured into several desperate situations with no regard for their own safety, said: “It was service by the brave for the brave”.

It was amazing courage

The drama began at 6.40am on January 23 when a message came from the coastguard that the SS Runswick, from Whitby, had been involved in a collision.

The steamer was struggling eight miles off Peterhead and the motor lifeboat Julia Park Barry left port at 7.50am.

The men faced scenes of chaos but the Runswick, which had been badly damaged at the bow, was escorted into Peterhead Bay.

Two other steamers, the SS Saltwick, of Whitby, which had also been damaged, and the SS Fidra, of Glasgow, followed for safety.

They arrived at 12:30 p.m. under the direction of the captaincy.

But with the weather deteriorating, an anxious watch is kept on the three liners, for if their anchors do not hold, they crash into the rocks.

For the next 12 hours, the crew remained inactive. At 12:30 a.m. Saturday, they heard and saw distress signals and the lifeboat was launched at 12:50 p.m.

The wind had picked up and the temperature had dropped. It was blowing galely, with a blinding snowstorm.

As he and his colleagues left port in the dark, Mr McLean could see no further than the length of his boat.

He crossed the bay and spotted the Runswick. She was already sinking on the rocks, lying on her port side, the sea breaking on her.

The lifeboat passes under his quarter, throws a rope to the crew and clings with great difficulty in the enormous swell.

The rope broke four times and another attempt had to be made.

Mr McLean kept the engines running to relieve the huge strain on the ropes, but massive waves crashed into the steamer and lifeboat.

The work is all the more difficult as the men are exhausted, but the whole crew of 44 is rescued.

The lifeboat returned to port and returned in the early hours of Saturday January 24.

But even though the crew had already been on duty for 7 p.m. and exhausted from their efforts, there was still a lot of work to do.

In what was now the third day of the gale, the explosions were at their fiercest.

The gusts reached speeds of 105 mph and they wreaked havoc.

At 8 a.m. on Sunday January 25, the helmsman was again on watch and, two hours later, a second liner, the Saltwick, landed.

She was close to the harbor and Coastguard lifeboats rushed to her aid.

The ship’s crew were told to stay on board until the weather improved, but six of them launched a raft in what turned out to be a terrible misjudgement.

It bobbed like a small craft between the steamer and the shore for an hour and when it touched the beach the sailors were thrown into the strong waves.

The battle with the elements raged

Service personnel went to their aid and eventually managed to grab all six and bring them ashore, but two of them were dead.

It happened outside the house of the honorary secretary of the lifesaving station, and he and his wife took the men – some of whom were delirious – to their dwelling, provided them with hot baths, food and clothing , and did everything they could to until they could be taken to hospital.

The lifeboat crew received a message from the Coast Guard and the coxswain walked quickly to observe the vessel from shore and ascertain its position before setting sail.

In the darkness, he could barely detect the steamer’s loom. But then a navy signalman was told in a message from his master that she was breaking up and that unless help came immediately, he and his crew would all be dead.

On the verge of drama

In such a desperate situation, the lifeboat was soon on its way. The harbor defense searchlight was switched on to help Mr McLean and his colleagues and the wind had died down a bit but the weather was still dreadful.

When they reached Fidra, it was nearly submerged and Peterhead’s men rushed to its aid.

As they did so, a large swell engulfed them, breaking over the steamer and almost swallowing the lifeboat with it.

Mr. McLean sent a line aboard the deck of the steamer, where the 26-man crew was crammed.

The ups and downs of the seas were terrible and he recalls: “It was a nightmare to save him from being thrown onto the liner”.

But he thrived under the pressure, and every time the lifeboat came close, men jumped aboard.

One of them had sprained his ankle and couldn’t jump, but as the rescue ship headed for the steamer, they snatched him to safety.

The lifeboat remained alongside for 50 minutes and then, with all the crew rescued, returned to port. Her entry lights were turned on and she returned at 3:15 a.m.

The crew tied her up and went home to get some dry clothes, but realized they might be needed again if the Saltwick needed help.

The men continued their heroism

There was little respite. At 8:30 a.m. a message came from the senior naval officer, instructing the lifeboat to save the crew of the Saltwick from further exposure.

It was now daylight and the liner could be seen lying on the beach, on its starboard side.

The only way to approach was between her and the shore and it was a treacherous operation.

RNLI records record: “There was a rocky ridge nearby and the lifeboat hit it. Then a great sea came in, lifted her almost out of the water and threw her on the rock.

“The sea hit again, swept the second coxswain from stern to bow and almost swept him and several other members overboard.

“The coxswain pushed full speed astern to clear the rock, and, with the sea hitting him at the same time, he was carried around the bow of the steamer to the side of the shore. Here he found deeper waters.

The crew of the tired and hungry Peterhead lifeboat

“Thirty-six of the Saltwick’s crew were rescued, but the captain and three officers remained on board. As there seemed to be more water at the stern of the steamer than at its bow, the lifeboat slipped out that way. Twice she hit rocks, but broke free and made it safely to port.

At this point, it was 11 a.m. on Monday, just 75 hours and 27 minutes since the rescue ship had initially visited the Runswick.

During the previous 27 hours, the crew had eaten very little food and had been offered no chance to rest. They were broken.

In total, they had gone out three times in a storm and freezing cold, twice in complete darkness and blinding snow, and had saved 106 lives.

The lifeboat itself had been damaged, first against the Fidra and then, more seriously, on the rocks between which the Saltwick lay.

Six feet of her wing had been destroyed, but it could be – and was – repaired.

A huge credit to their community

In the end, the crew rose above the call of duty and were at the heart of one of the greatest rescues in RNLI history. And their remarkable courage still resonates today.

Jurgs Wahle, the current head of operations at Peterhead Lifeboat Station, told the Press & Journal: “As we approach the 80th anniversary of three extraordinary services where 106 lives were saved, the feat is even more extraordinary given the very basic ships and equipment of the 1940s.

“When you consider the appalling weather and sea state, it is truly humbling that the helmsman and crew showed such bravery and tenacity with little respite or time to to rest.

“The Peterhead crew’s willingness to risk everything in their attempt to save lives is an inspiration to all of us at the station.

“Eighty years later, we are incredibly proud of their legacy and strive to emulate their bravery, teamwork and seamanship as we outfit our lifeboat today.”

The famous Peterhead Lifeboat is on display after its restoration

Oil tanker in danger: When the ecological disaster was avoided in St Kilda in 1981

A monument to Moray: New book a love letter to Lossiemouth’s fishing past

[When Peterhead lifeboat crew battled to save more than 100 lives]