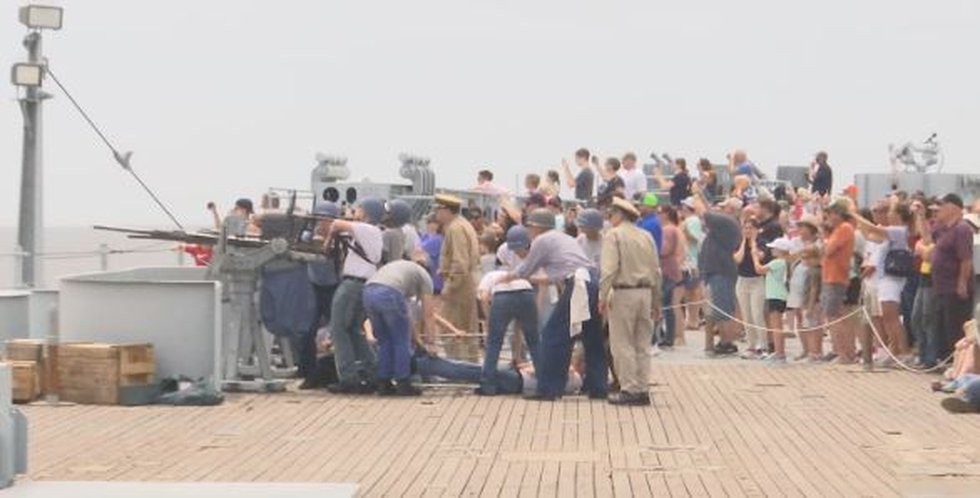 MOBILE, Ala. (WALA) – This was a scene from World War II – set Saturday afternoon – on the USS Alabama.

A love of preserving the past – inspires the battleship’s living history crew to stage the greatest generation’s sacrifice re-enactments.

“We try to continue their stories – stories that they told us. Stories that my father’s generation told me. And we try to pass them on and preserve our naval heritage and a bit of our history, which slowly fading from the scene,” said Battleship Alabama Living History Crew Captain Peter Cash.

Planes, guns and wounded – a team of around 50 volunteers put on the show.

Howard is also an active military man – and will tell you that’s about as real as it gets.

“I encourage people to come see this mainly because it’s a living history crew – you get to interact with the sailors, talk to the marines and see… A little insight into the lives of the men and women before we have to live,” Howard explained.

Ben Erickson and his wife had a ringside seat. Although the couple have an annual park pass, this is their first replenishment.

“I haven’t been able to see an airplane bombing a ship up close like that. I don’t know where else in the world you’ll be able to see a re-enactment with them getting as close as they did and taking off like they were. Very cool,” Erickson said.

A unique perspective aboard the “Mighty A” – showcasing the historic ship that calls the port city home.

“Again, the Alabama is unique in that regard because she only served a few years after World War II and then was essentially mothballed intact with all of her machinery in place. So we actually have more “original equipment – machines in the machine shop or tools in the tool room than most other museum ships. So we’re extremely lucky,” Cash explained.