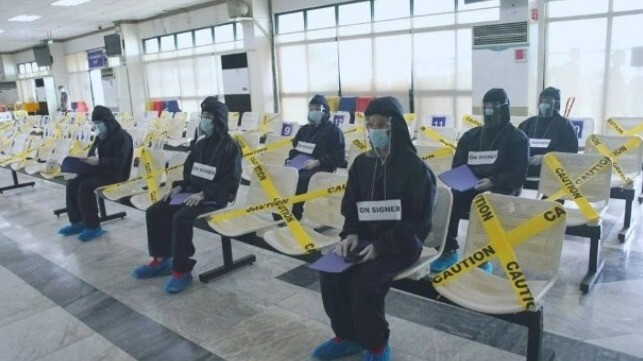 Seeking to anticipate a possible new wave of crew change crisis as governments around the world respond to the spread of the Omicron variant of COVID-19, major maritime unions have announced the launch of a new initiative to deliver a network of quarantine facilities. The groups said the program was urgently needed to prevent the shipping industry from returning to the worst extremes of the crew change crisis, which has seen 400,000 sailors aboard ships beyond their limits. initial contracts at the end of 2020.

Named “#CrewEQUIP”, the program will create a list of trusted hotels available for crew quarantines which are independently reviewed and inspected by Lloyd’s Register, the program’s external auditor. The effort is designed to overcome frequent changes in government border policies affecting international crews by putting in place consistent standards and the best industry protocols, to bring crew aboard ships safely, even if governments increase their quarantine requirements.

“This new program of quarantine facilities will give the industry more confidence to support the movement of more seafarers more regularly around the world knowing that there is a considerably lower risk of the introduction of Covid- 19 in a ship if a sailor joined via a CrewEquip Approved Facility, â€said Captain Belal Ahmed, President of the International Council of Maritime Employers.

For November, the Neptune Report’s crew change indicator, which tracks crew change statistics with data from major crewing and shipping companies, reported significant progress in reducing the number of crews. crews at sea towards the end of or beyond their contracts. The latest indicator showed that the number of seafarers on board ships beyond the expiration of their contract fell to 4.7 percent from 7.1 percent in October. The number of seafarers on board ships for more than 11 months had also fallen to less than 1%, with organizers reporting that this was the lowest number recorded by NDCCI since it was first published in May 2021.

While unions believe the global network of quarantine facilities will help manage crew access, they also continue to demand a global, permanent system with a digital vaccine and testing recognition. The groups also welcomed the announcement this week of a new joint WHO-ILO-industry action group to advance digital â€œyellow cardsâ€ for seafarers and other workers who have to cross borders for their work.