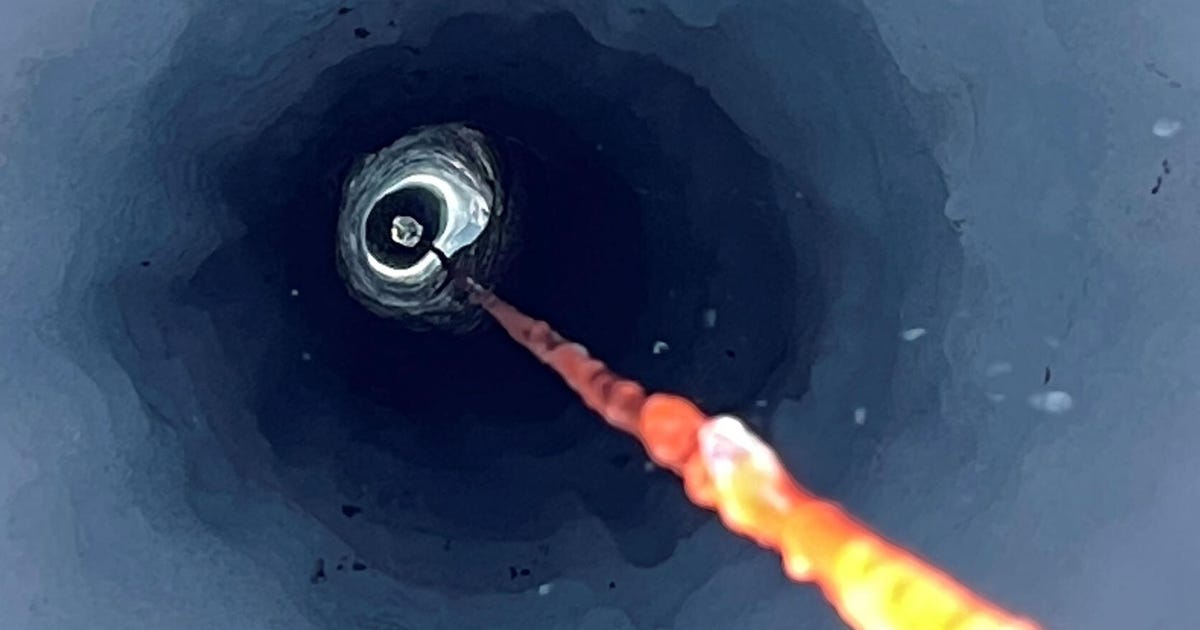 Antarctic scientists have opened a portal to a world of tiny crustaceans that thrive in a salty estuary about 1,600 feet below the Ross Ice Shelf, Antarctica’s largest ice shelf.

New Zealand scientists from the National Institute for Water and Atmospheric Research melted through the plateau with a hot water pipe until they discovered a river under the ice of about 6 .5 miles long, just over 300 yards wide and 800 feet deep. “Imagine Sydney Harbor but less than 600 meters [2,000 feet] ice and snow,” said Craig Stevens, oceanographer at NIWA. There, it is completely dark – too far away for sunlight to reach – and extremely cold.

But when they lowered some recording equipment, they were surprised to find that the river was full of amphipods. Shrimp-like crustaceans flitted around the place, illuminated only by the camera lights.

In a report by NIWA, Stevens said “to see any of these things would make you jump for joy. We were inundated.”

“The fact that all of these animals are swimming around our camera means that there is clearly an important ecosystem process going on there, which we will be doing more research on by analyzing water samples to test things like nutrients. “, he added.

Stevens told CNET there were sometimes “absolute hordes” of swimmers buzzing around the place. But other records in the river revealed far fewer creatures. This variability, he notes, is “part of the excitement.”

The worlds under Antarctica remain a mysterious place because access to these rivers under ice or to the water column is particularly difficult. You have to battle the weather and drill or melt through thick ice to dispatch drones or camera gear. That is why Ernest Shackleton’s famous ship, the Endurance, lay lost for over a century — it’s really difficult to travel in these worlds under the ice. But once you clear this formidable barrier, endless bounties await.

“To some degree, everything is so new that we can just lower a camera on a rope and get some never-before-seen scenes,” Stevens said.

In 2021, Antarctic researchers from the British Antarctic Survey discovered unusual life forms at a depth of about 4,000 feet: strange “suspension feeders”, like sponges, huddled against a rock in the abyssal depths. Their discovery took place on the other side of the continent, under the Filchner-Ronne Ice Shelf, and it was something of a surprise – as mobile creatures are known to occupy the dark ocean floor Antarctica, it is unexpected to find Stationary creatures surviving in nutrient poor areas.

A similar question arises for the amphipods discovered under Ross. “What provides the nutrients? said Stevens, adding “that’s probably what intrigues us the most about it.”

It’s a relevant time to discover never-before-seen hotspots of Antarctic life and ask these kinds of questions. Parts of the continent are warming faster than anywhere else in the world, which could encourage alien species to take hold, damaging a fragile ecosystem that has long been isolated from the rest of the world.

Stevens noted that the first step in understanding the significance of these under-ice estuaries for Antarctica is to determine their similarities and differences to normal estuaries. The team plans to analyze water samples and test for nutrients, which could reveal how life thrives so far from light and the open ocean.