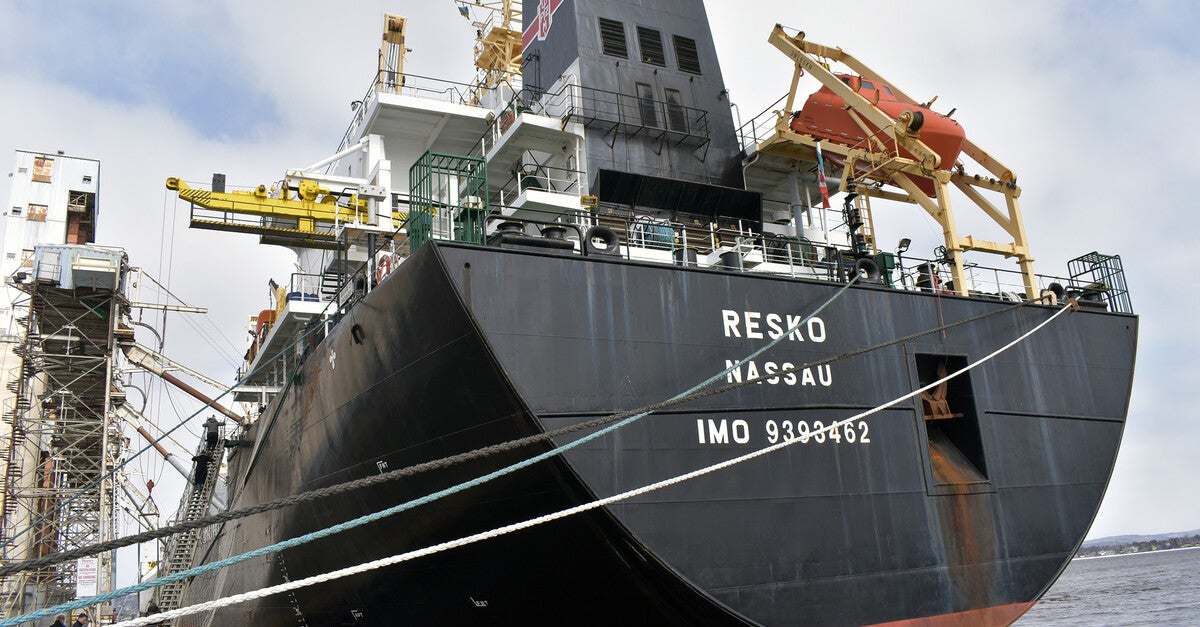 The first ocean-going vessel of the sailing season arrived in Duluth-Superior this month, carrying five crew members from the beleaguered nation of Ukraine.

Just a day before the Russian invasion, the crew showed up to work on the Resko, a ship owned by the Polish shipping company Polsteam.

The experience has been stressful for the Ukrainian crew members who are under contract with the ship until August. The ship’s cook, Valerii Yehorov, said he checks in with his wife and children online daily.

“My family and my wife are going to another country, Moldova,” he said. “My parents stay in Ukraine – Chornomorsk. (They) have air alarms because (they) have so many rockets – get so many attacks.”

The same goes for Oleksandr Ivanov, the steward of the Odessa ship. His wife and children, ages 6 and 10, holed up in their homes to avoid rocket attacks three or four times a day.

Mykola Bakhtin, a marine from the beleaguered port city of Mariupol, said he wanted to jump ship and reunite with his family after being unable to contact them for two weeks in March. He has since learned that they had fled to Germany to escape the constant attacks.

Bakhtin said he wanted to return if Ukraine won the war and help rebuild the city, but he did not want to return home if Mariupol was under Russian control. Russian President Vladimir Putin claimed victory in the battle for the port city on Thursday, though Ukrainian troops are still holding out inside a steel mill. Mariupol is a key hub for the production of iron and steel, but also for shipping these products along with coal and grain.

The Russian invasion has upended the lives of Ukrainians like the ship’s crew, and plunged the global and regional agricultural supply chain into a world of uncertainty.

Ukraine and Russia account for about 30% of world wheat trade and 20% of corn exports, according to the Associated Press. Earlier this month, Reuters Ukraine’s reported grain exports in March were four times lower than in February due to the Russian invasion.

According to the last global agricultural outlook of the United States Department of Agriculture. The Food and Agriculture Organization of the United Nations said grain prices rose by about 17 percent in March largely partly to the war in Ukraine.

Deb DeLuca, executive director of the Duluth Seaway Port Authority, said it was unclear how the war in Ukraine might impact grain shipments in the twin ports.

“It all depends on yields from other breadbaskets, other wheat-exporting countries, the strength of the dollar, crop yields in various parts of the world and the country,” DeLuca said.

About 1 million tons of grain cargoes usually pass through the port every year. Last year, grain shipments fell to about 808,000 tons. This marked his second lowest season total since 1890, according to Agri-View.

Scott Hilleren, the ship’s agent at Guthrie-Hubner, Inc., said hurricanes in the Gulf of Mexico have boosted grain shipments out of the Port of Duluth-Superior in the past. He said grain exports could increase if Ukrainians cannot plant wheat or if Russian sanctions impact global grain trade.

“We should know more in the next two months about what’s going on there,” Hilleren said. “I don’t know if they can plant their crops or what’s going on in Ukraine, but we should probably know in August how it’s going to be in Duluth here in terms of grain exports.”

Rising food prices and supply chain disruptions from Ukraine and Russia could create opportunities for farmers in the Midwest and Wisconsin. Despite this, they face rising fertilizer prices, inflation, weather conditions and disruptions caused by the COVID-19 pandemic.

The crew of the Resko had stopped for a few days in the twin ports to load about 16,200 short tons of spring wheat and 5,400 short tons of durum wheat at the Gavilon Grain terminal in Superior bound for Italy, according to the port authority.

Before their departure, Oleksandr Ivanov said they hoped to reconnect with their families when their contract ends.

“We hope that until the end of May everything will be fine,” he said. “But, we hope. You know, the situation changes every hour. Who knows with crazy Putin (what is) ahead.”