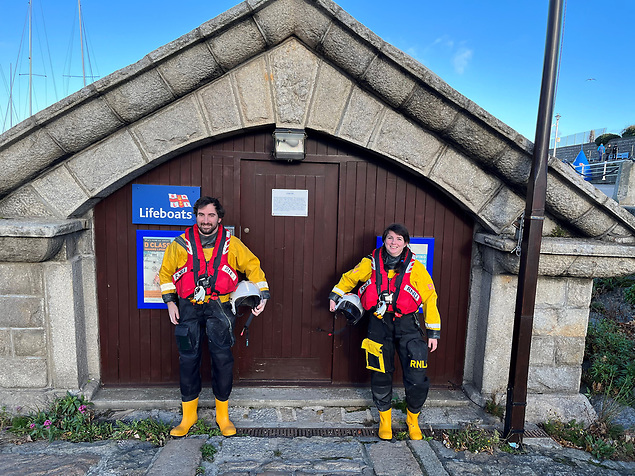 With over 1,500 volunteers across Ireland, every RNLI crew member signs up to save everyone from drowning – the charity’s mission since 1824. This Christmas Dun Laoghaire RNLI has a number New volunteer rescue boat crews who are currently undergoing training to be able to rescue these ailing at sea and who will be part of the lifeguard team at the South Dublin Rescue Station. Corkman Aidan Sliney and Ailbhe Smith, from Ballinteer, are no strangers to the sea and are among a host of recent recruits to join lifeboat crews in Ireland during the pandemic. The two new volunteer lifeboat crews call on the public to support the RNLI this Christmas.

Although new to Dun Laoghaire RNLI, Aidan Sliney is no stranger to the lifeboat world. In Ballycotton, Sliney’s name is famous in lifeboat circles because her great-grandfather and grandfather were involved in one of the most famous rescues in RNLI history, the Rescue from Daunt Rock in February 1936. Aidan’s father was also on the lifeboat for many years. and his brother, well-known comic book artist Will Sliney, is now part of the crew of the Ballycotton lifeboat. The job took Aidan overseas to Stockholm and Manhattan for a few years and he recently returned to Dublin with his wife and young child. Upon joining Dun Laoghaire RNLI, Aidan resumed basic training to brush up on his lifeboat skills and is currently training on the station’s Class D lifeboat.

Commenting on his decision to join the lifeboat crew at Dun Laoghaire, Aidan said: “I am delighted to be able to put my lifeboat experience in Dublin to good use and to volunteer for Dun Laoghaire RNLI. We have the same all-weather lifeboat at Ballycotton, but now I’m familiarizing myself with the station’s inshore lifeboat, which does a lot of the rescues near shore. It’s a busy lifeboat station with an amazing crew and I’m learning new skills and working with a new team, but it’s the same wherever you go in the RNLI.

“Everyone is passionate about what they do and wants to help people in difficulty on the water. The training is excellent and I gladly start from the beginning and get to know it again, you can’t take anything for granted. We have had a few new starters at the station, and we are helping each other throughout the training. We all have different backgrounds, which means we learn from each other as well. The current lifeboat crew have been extremely generous in helping us improve our skills.

Ailbhe Smith grew up in Ballinteer but moved to Dun Laoghaire during the pandemic. Extremely experienced mermaid sailor, Ailbhe has raced competitively on traditional “Mermaid” wooden boats for years. A few years ago while in Sligo she saw the local lifeboat crew saving a diver and once she moved to Dun Laoghaire Ailbhe informed the lifeboat station of the opportunity to volunteer and was welcomed on board.

Adding her support to the RNLI Christmas call, Ailbhe commented, “When I saw the RNLI save a diver at Rosses Point in Sligo a few years ago, I knew I would love to do that, and I Sorted it out for later. You have to live near the lifeboat station to be able to make a ‘scream’ and then a few years later I found myself living in Dun Laoghaire and it seemed inevitable to me . I love the sea and my years of sailing have given me a healthy respect for its power. It was a bit surreal to join us during a time of restrictions, but it did not stop us as there is a lot to We are always looking to get on the lifeboat and practice and Dun Laoghaire is a very busy lifeboat station, so I look forward to putting my training into practice and helping people.

“When the pager goes off, no lifeboat volunteer is hesitant to answer the call, and these rescues wouldn’t be possible without donations from generous RNLI donors, who help fund the essential kit, the training equipment that lifeboat crews need year round. Thank you to everyone who supports the call this Christmas.

To donate to the RNLI Christmas Appeal, visit: RNLI.org/Xmas