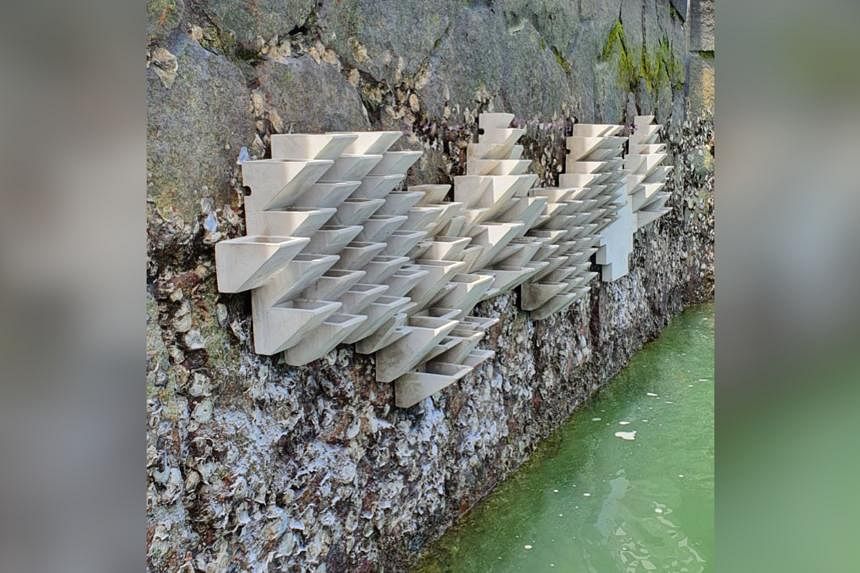 SINGAPORE – While seawalls are Singapore’s traditional coastal defense against rising sea levels, scientists at the National University of Singapore (NUS) are redesigning them to ensure they don’t come at the expense of of underwater life.

Despite the ability of the underwater parts of some man-made defenses to support coral communities, intertidal dykes do not support the same rich biodiversity as natural coasts, said Associate Professor Peter Todd of the Marine Ecology Experimental Laboratory of the NUS.

More than 65% of the natural shorelines here have been transformed into harsh coastal structures such as seawalls and rocky slopes.

This should grow by the end of the century. In 2019, Prime Minister Lee Hsien Loong announced that $100 billion or more could be needed in the long term to protect Singapore against rising sea levels, including plans to strengthen coastal defenses.

To reduce the impact of existing seawalls on sea creatures, NUS scientists have developed an assortment of tiles that can be retrofitted to seawalls to mimic features of the natural habitat.

Concrete tiles, from wedge-shaped “rock pools” to domes depending on the surface they are placed on, act as optimized homes to enhance the variety of marine life.

The results of their studies show that they can double the diversity of marine organisms on gray marine infrastructure, Professor Todd said.

He added: “The tiles can support between 20 and 25 species compared to a traditional granite dike, which has around 10 species. These organisms include algae, bivalves, many marine snails, and some crustaceans.

Although these organisms may not seem charismatic, they are important food sources to support larger organisms such as fish in the littoral ecosystem, he said.

Currently, 350 tiles are installed in Changi Bay and another 60 in Sentosa, according to Professor Todd.

After 12 years of experimenting with different designs and materials, the tiles were also designed to withstand Singapore’s tropical climate, which can see seawall temperatures soar to 50 degrees Celsius, Prof Todd said.

Going forward, the team is refining the tiles to be more environmentally friendly, experimenting with different types of green concrete.

The tiles are designed to last 20 years, but this can vary depending on how exposed the shoreline is to waves, Prof Todd said.

Does sunscreen kill marine life? New research shows how quickly it can become toxic in the ocean.