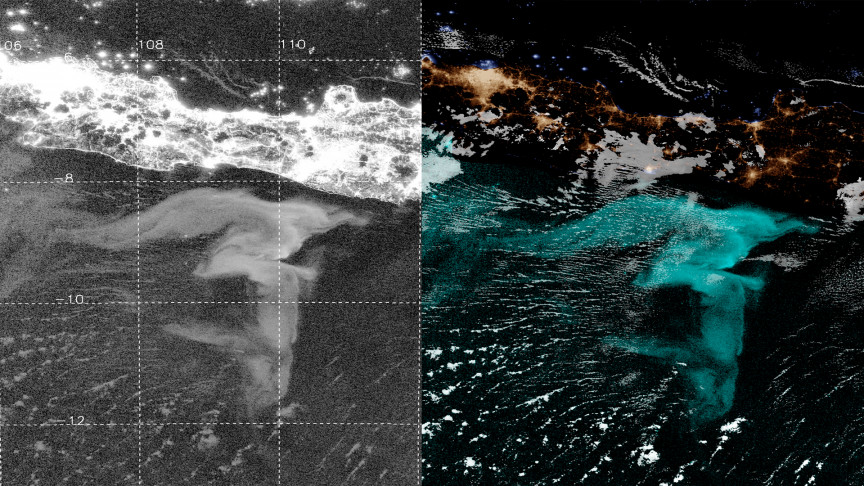 When massive sections of ocean water begin to glow at night due to the action of glowing bacteria, this phenomenon is called the milky sea. However, Milky Seas appear very rarely – they are believed to only appear once or twice a year and in random locations. Recently, a team of researchers from Colorado State University (CSU) confirmed that the crew of a private yacht Ganesh encountered a milky sea south of the island of Java.

The milky seas produce a strange but regular and widespread marine bioluminescence that occurs over a wide area. While sharing his perspective on this wondrous phenomenon, CSU Principal Investigator and Professor of Atmospheric Sciences Steven D. Miller said THAT’S TO SAY, “The Milky Seas are massive bioluminescent screens, the largest known on Earth. I like to call them the 8th unofficial natural wonder of the world!

Professor Miller and his team believe that milky seas result from a complex coupling (or communication) between the atmosphere, the ocean and marine life. Under appropriate conditions, this coupling produces population explosions of glowing bacteria (which would be responsible for the glow). The phenomenon of the milky sea was first noticed in June 1854 around Java, but curiously, scientists still don’t know which strains of bacteria cause this unique bioluminescence.

Ganesha’s Weird Discoveries and the Science Behind Them

On August 2, 2019, the yacht Ganesh (named after Lord Ganesha, the Hindu god of wisdom and new beginnings) entered a bright, shiny strip of water in the Indian Ocean region (between Lombok and Cocos Islands) as it moved on its way to circumnavigate the globe. The crew experienced milky seas for about eight hours between 9 p.m. and 5 a.m. in an area extending over 100,000 km2.

The CSU study which confirms the bioluminescence is based on crew member interviews, digital photography, video recordings from the yacht and satellite images of the incident. Additionally, the researchers also analyzed GPS data, logbook comments, and even a dated email from the crew to the family the day after their experience, where it was clear they still had no idea of ​​what they had just seen.

“This is a major expression of our biosphere, and one that occurs at the bottom of the marine food chain (i.e. primary production), so it is very important for us to better understand this response. than we’re doing in a gross way right now,” Professor Miller said of the importance of the milky seas.

He further added, “This goes to the heart of ‘Earth System Science’ where we recognize that all components of the climate system (including life itself) are connected – understanding how these connections change in a changing climate. is of utmost importance, especially when it comes to marine life!

The researchers suggest that it is possible that there is not just one but several species of bacteria that are collectively responsible for the milky sea phenomenon. However, it is almost impossible to confirm the same because there is no way to sample water with marine bioluminescence. The Milky Sea Phenomenon can appear anywhere and anytime in a body of water, and it’s only a matter of luck if you come across one in your lifetime.

Usually, milky seas appear in remote and transient ocean regions, far from the reach of scientists, so most of them are detected using satellite feed. This is why even after 168 years from the first sighting of the Milky Sea in 1854, scientists don’t know much about the phenomenon. Professor Miller suggests that light bacteria are one of the causes of marine bioluminescence, but it may not be the main cause; there could also be other factors.

He believes that by understanding the root cause of the milky seas, we can anticipate such future events. So, in addition to light bacteria, his team also studies ocean currents, atmospheric circulation, and the chemical and biological changes that occur in ocean water due to changes in temperature and climate.

“We consider circulations in the atmosphere, which in turn drive ocean currents, on time scales ranging from months to years. How these circulations might translate into changes in ocean physical, chemical and biological responses, for example, in a changing climate, is a key question in determining whether we will see more or less milky seas in the future, and whether they may begin to occur in new areas,” said Professor Miller THAT’S TO SAY.

Professor Miller has been studying the Milky Seas since 2004 and he thinks there is still a long way to go. With his team, he will now endeavor to learn more about atmospheric circulation. He is also looking forward to designing advanced satellite sensors that could measure bioluminescence with great efficiency and detail.

He added: “Above all, I dream of one day being on a ship as we cross a vast milky sea, immersing ourselves in it and basking in its glow! I know, not very scientific, but what inspires us?

The study is published in the journal PNAS.

“Milky seas” are massive expanses of ocean that are evenly and regularly glowing as seen at night. The phenomenon is thought to be caused by luminous bacteria, but the details of the composition, structure, cause and implications of the milky sea in nature remain largely uncertain. Between late July and early September 2019, specialized low-light satellite sensors detected a possible bioluminescent Milky Sea in South Java, Indonesia, extending more than 100,000 km2. Upon learning of these findings, crew members of the yacht Ganesha contacted to confirm and share details of their personal encounter with this same event. Here, we document Ganesha’s experience as recalled by the crew, compare their journey to satellite data, and assess their photographs of this milky sea.