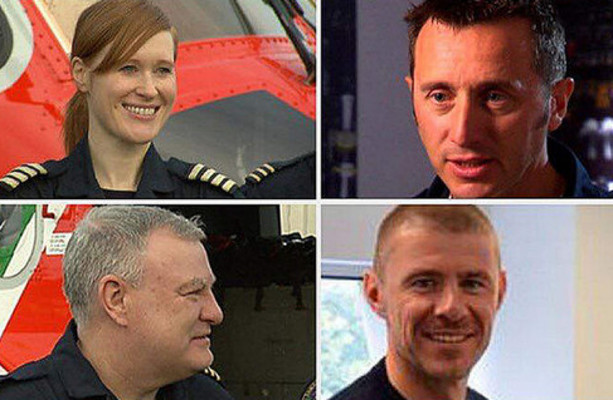 ON MARCH 14, 2017, the four-person crew of the Rescue 116 helicopter completed their final mission.

More than four years after the deaths of Captain Dara Fitzpatrick, Captain Mark Duffy, wincher CiarÃ¡n Smith and winch operator Paul Ormsby in a fatal crash off the coast of Mayo, an investigative report has revealed that ‘there were 12 contributing factors to the incident.

The helicopter was tasked with providing “top cover” for the Sligo Rescue Helicopter, which was on a long-range rescue mission. The R116 crashed after hitting Blackrock Island on its way to Blacksod to refuel.

A final report from the Air Accident Investigations Unit (AAIU), released today, found that the probable cause of the crash was bad weather, with the altitude of the helicopter and the crew not at running from a 282-foot obstacle in the flight path because it was not identified on the flight. Management system (FMS).

The 350-page report describes in detail the events of the hours and minutes leading up to the accident.

Call for a fishing boat

9:40 p.m .: Malin Head Marine Rescue Sub-Center (MRSC) in Donegal received a phone call from the captain of a fishing vessel indicating that a crew member had been injured. The captain reported that one of the crew members had lost â€œthe top half of his thumbâ€.

The captain was informed that a helicopter was on alert, that it would proceed to Blacksod and depart from there to the ship’s location, 140 miles west of Eagle Island, off the north coast. -West of Mayo.

The Sligo-based R118 helicopter commander was contacted and informed that a “top cover” would be arranged. In long-range rescues for rescue helicopters, â€œtop coverâ€ is provided by a second aircraft to ensure that communications can be maintained between the rescue team and the onshore coordination center.

9:53 p.m .: The Malin center called the Dublin coordination center stating that the R118 would perform a long-range medical evacuation and asking if the Dublin helicopter (R116) would be available to provide superior coverage.

There was a conversation about what would be needed and the Dublin center asked if an Irish Air Corps (IAC) CASA maritime patrol aircraft could be requested. Malin said he was unsure if there would be a CASA plane available.

10:02 p.m .: Malin contacted the IAC duty officer to inquire about the availability of a CASA. The duty officer called back to report that there was no maritime patrol plane available at the time, but that a plane could be offered at 8 a.m. the next morning. Malin MRSC declined the offer and said they would make other arrangements.

Malin contacted the Dublin Coordination Center again to request coverage and discuss the nature of the assistance required. There have been discussions about refueling at Blacksod.

10:10 p.m .: The Dublin MRCC called the R116 Dublin duty pilot for superior coverage of the R118 tasks. The commanding officer of R116, Captain Dara Fitzpatrick, accepted the mission and asked MRCC Dublin to alert the other crew members by TETRA radio call.

10:35 p.m .: Once the entire helicopter crew arrived at SAR Base Dublin they had a meeting in the operations room and just over ten minutes later all four were on the helicopter. .

Prior to departure, Captain Fitzpatrick expressed doubts to MRCC Dublin about the weather conditions at Blacksod and indicated that R116 would be heading towards Sligo instead of the Co Mayo site.

11:06 p.m .: The crews of R116 and R118 were in regular communication and the winch operator Paul Ormsby told Captain Fitzpatrick that R118 was about to land at Blacksod.

â€œOh great, thank you, you might find out what the conditions are there as well,â€ she replied.

He checked and advised her “the right conditions at Blacksod”.

Captain Fitzpatrick compared the options of going to Sligo or Blacksod in terms of flight time and fuel and asked for a number of pounds before deciding they would go to Blacksod.

“We’re not under pressure so pretty happy with that and see if we don’t go up we have plenty of fuel for”; Co-pilot Mark Duffy jumped in “take us to Sligo” and she continued “come back so I’m just going to give you a direct to em Blacksod now.” “You will have a left turn”.

23:36: Captain Fitzpatrick told the crew that she “was just going to re-familiarize me with Blacksod … south”. The report notes that it is likely that she was looking at a course index as she indicated that she was going to add the course to the helicopter’s automated system.

11:52 p.m .: Captain Fitzpatrick noted that she did not believe she had been in Blacksod “for fifteen years”. Winchman CiarÃ¡n Smith replied that â€œit’s been a while for me too, okayâ€. Fitzpatrick asked his co-pilot if he had been there recently, to which he replied “No, not recently”.

The report states that the fact that there had been no further conversation on the topic at the time suggested that they did not consider unfamiliarity to be a risk factor that required further discussion. thorough.

00:22: The flight crew discussed staying at a safe altitude until they were off the ground before lowering the altitude above what they believed to be open water.

00:24: Winchman CiarÃ¡n Smith remarked that the heights were “obviously here somewhere” to which Captain Fitzpatrick replied: “Downstairs is our first point there, we’re going SDA, it’s kind of when we’re over Achill. “

The investigation report notes that Smith was the only member of the crew to raise the issue of heights / elevated terrain relative to the automated route and that the flight crew seemed satisfied that this did not merit a detailed examination.

00:32: The flight crew briefed on arrival at Blacksod heliport. The investigation report indicated that they did not appear to have taken into account the obstacles to the landing site directory.

No news is bad news
Support the journal

00:43: The â€œbefore landingâ€ checklist has been launched. Meanwhile, co-pilot Mark Duffy said “starting to take off a little over eight miles in the ten o’clock position”.

Duffy said there were “little targets six miles at eleven o’clock, big over there on the right.”

An “ALTITUDE ALTITUDE” warning sounded and Captain Fitzpatrick told the crew “There is only one small small island which is BLMO itself”.

Winchman CiarÃ¡n Smith alerted the pilots that he was “looking at an island right in front of us now guys.”

“You want to come,” he said to Fitzpatrick.

She asked for confirmation and he said “twenty degrees to the right, yeah”.

Captain Fitzpatrick asked the co-pilot Duffy to select the heading mode and he confirmed that it had been done.

Less than a second after this acknowledgment, the report notes that winchster CiarÃ¡n Smith announced “come right on, come right, JUST COME”.

00h46: The helicopter collided with the terrain at the western end of Black Rock, exited controlled flight, and struck the sea.

Several warning alerts could be heard on the recording as the last words – “we’re gone” – came from co-pilot Mark Duffy.

1h08: Blacksod Lighthouse contacted the head of MRSC Malin because R116 did not arrive at the helipad as expected.

1h13: MRSC Malin made a MAYDAY relay to all stations informing them that communications had been lost with R116 and requested that any vessel with information contact them.