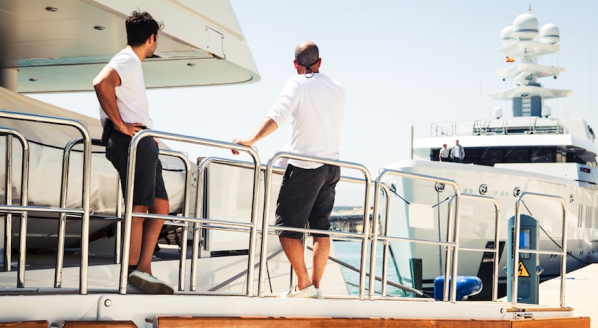 International Nautilus, an international trade union and professional association representing seafarers and related workers, encourages crew members to register as members. The organization can help and assist with disputes over wages and conditions, offer free legal service to its members and provide workplace support to seafarers. Interested persons can also use a code of 30 % by signing up for She of the Sea, which can be obtained via email [email protected], however, this support can only be offered once the individual is a registered member. Legal protection and services cannot be guaranteed to those who register after an incident has occurred.

The majority of Russian superyachts, which make up around 10% of the superyacht fleet, have already left Europe for the Maldives and Seychelles. However, there are still a number of large yachts operating on the mainland. In the event that the owners of these vessels are sanctioned, one must also consider the thousands of crew members, shipyard workers and independent contractors who would also be affected by this.

Nations and global organizations around the world have tightened sanctions against Russian-owned luxury assets;

Josep Borrell from the EU said:

EU sanctions include hidden assets such as yachts owned by Russian oligarchs but flying the flag of another Mediterranean country – this was in response to a question from Irish Times’ Naomi O’Leary.

“Today I have written to all UK ports asking them not to give access to Russian-flagged, registered, owned, controlled, chartered or operated vessels. Given Putin’s action in Ukraine, I have made it clear that these ships are NOT welcome here with no tracking legislation.

“Next week, we will launch a multilateral transatlantic task force to identify, track down and freeze the assets of sanctioned Russian companies and oligarchs – their yachts, mansions and any other ill-gotten gains we can find and freeze under law. “

“The Principality has adopted and implemented, without delay, procedures for freezing funds and economic sanctions identical to those taken by most European States.

Laura Molineux, strategic organizer at Nautilus has provided the following answers to questions that may be of interest to the crew and other superyacht industry stakeholders…

– What advice would you give to Crew working on Russian-owned superyachts?

We recommend that the crew remain vigilant and carry out further risk assessments. Consider increasing/revisiting security checks currently in place and report anything suspicious to the authorities (especially after this story.)

There are also problems regarding entry into the Black Sea.

Similarly, the Joint War Committee (composed of representatives from Lloyd’s and IUA markets underwriting) has published that Ukrainian and Russian waters in the Black Sea and Sea of ​​Azov are also considered war zones. Therefore, it is unlikely that a yacht owner would intend to enter the area at this time, especially as the vessel’s insurance would likely not apply cover.

However, if this is the owner’s intention, the crew should be given the opportunity to leave the vessel before that, in a port that can facilitate their repatriation.

– What does Nautilus do for the crew besides encouraging people to sign up?

Nautilus can provide representation and assistance to all ranks and nationalities working onboard yachts, including deck, engine and interior crew. Regardless of your nationality, country of residence or role, members can access help from our team of industry experts and organizers.

The Union operates a 24/7 helpline, so members can call us anytime from anywhere in the world for assistance. We not only have in-house legal expertise, but also a network of lawyers around the world.

– Are there any worst/best scenarios you can anticipate that you think the crew should be aware of?

There are a lot of unknowns at the moment, and the situation could change without notice. However, it is likely that new sanctions will affect yachts in the coming days or weeks to some extent.

Britain’s Secretary of State for Transport has announced that ships flying the Russian flag – or those that are registered, owned or controlled by anyone connected with Russia – are banned from entering UK ports.

We understand that seafarers are concerned about the possibility of financial penalties that could apply to wealthy Russian yacht owners. At this point, we are aware that this is not a general application to all wealthy Russians, however, the list could be reviewed or extended.

If a yacht owner is sanctioned to the point of having their assets frozen, it will have an impact on the operation of the vessel. High EU representative Joseph Borrell confirmed that EU sanctions include hidden assets, such as yachts owned by Russian oligarchs but flying the flag of another Mediterranean country. There could also be problems if SWIFT payments are interrupted, as this has implications for the payment of salaries.

Nautilus would review each member’s case individually to assess the situation applicable to them and provide advice, assistance and representation. Nautilus is closely monitoring the situation and preparing/updating information for our members as things develop. However, it is important that the crew join Nautilus before a situation arises, as the crew will not be eligible for legal representation if the matter predates their joining. Once a member, the crew must contact the union as soon as they are aware that a problem is going to have an impact on them.

– Do you have a discounted membership or incentive for crew working on Russian owned yachts?

The current fee for an officer working on a yacht is €335 and €230 for the crew, per year. This can be paid in full, semi-annually, quarterly or monthly. This equates to just €6.44 for officers and €4.42 for crew per week, and they have Union support behind them.

As of this writing, it is day 6 of the war in Ukraine and things seem to be getting worse. The wider and mainstream media have talked a lot about the superyacht industry, largely because of its connotations with greed, exuberance and the Russian oligarchy. However, the media failed to take into account the thousands of seafarers, shipyard workers and business owners who depend on the industry for a living. By providing this insight, Nautilus hopes to bring some clarity to those facing an uncertain future and wondering if they should choose their morality over their well-being.

Ashore, countless efforts were made to support the wartime aid of superyacht industry stakeholders. Besides organizations, individuals have also banded together to ensure that procedures and solutions are implemented quickly and safely. Margarita Amam, Managing Director of IMS GMBH and Nineke Pretorius, a former crew member, have contacted the crew of the superyacht to ensure there is communication between crew members and developments ashore regarding the support of Nautilus. Pretorius, who no longer works on the yachts due to medical reasons, told SuperyachtNews:

“I suffered a serious injury on board and unfortunately I was not a member of Nautilus – so I plead for any crew member who is willing to listen as there are many situations on board where the crew does not isn’t protected as it should be and that’s where Nautilus helps so much.

There was also a GoFundMe The page created on behalf of the superyacht community and members of the Monaco-based superyacht industry have also been in contact with Polish councilors and MPs to send donations across the Ukrainian border. If any of our readers would like to get in touch with developments regarding the Ukrainian crisis and its impact on the yacht market, please feel free to email us. We welcome contributions and ideas from all of our readers around the world.

Click here to become part of The Superyacht Group community and join us in our mission to make this industry accessible to all and prosperous for the long term. We offer access to the superyacht industry’s most comprehensive and longest-running archives of critical information, as well as a comprehensive, real-time database of the superyacht fleet, for just £10 a month , because we are an industry with a mission. Register here.