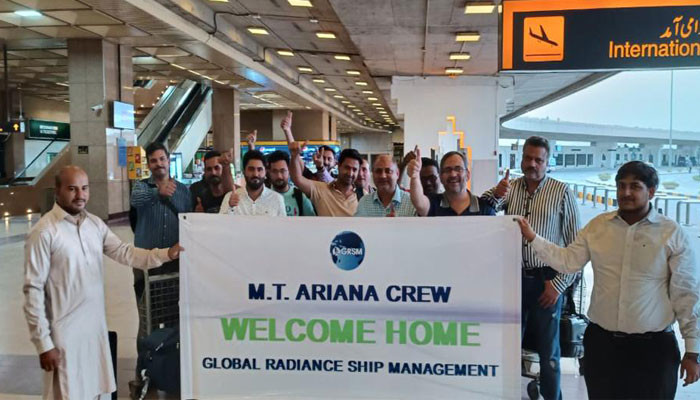 LONDON: Around two dozen Pakistani crew members from the ship named Ariana trapped in Yemen’s war zone have returned home after three weeks of a life-and-death situation due to unprofessionalism and critical negligence of the shipowner Saint James Shipping.

Geo Newsin a report last week highlighted how the lives of 86 Pakistani seafarers were at risk on four vessels owned by Saint James Shipping due to the owner’s evasion of meeting financial and legal obligations, including ship’s wages crew, bunker and supplies, etc. After exhausting all legal means, GRSM ship managers also informed the Pakistani government about the suffering and safety of these poor seafarers.

A spokesperson for Saint James Shipping Ltd, speaking on behalf of CEO Sam Tariverdi, said in a statement that the difficulties were due to a “standoff between two competing masters” and also because the “owners had lost confidence in the previous crew”. after a series of incidents and forced to change them. The crew has now been changed and fully paid and safely repatriated to Pakistan”.

The spokesperson for Saint James Shipping Ltd confirmed that the other vessels currently remain detained in Indian ports. “It is our hope that these issues will soon be resolved and it remains the intention of Saint James and its directors that all seafarers receive all payments due to them, the difficulties and delays experienced by seafarers are deeply regretted,” said the spokesperson.

Saint James Shipping is owned by Sam Tariverdi, son of Dr Hassan Tari Verdi Farman and is said to have Iranian royal lineage.

The crisis for Pakistani crew members began around early January after the owner seized funding from the ship management company, even for mandatory expenses, and began diverting revenue from the ships to his accounts. personal.

Consequently, the seizures went from bad to worse with each passing day. Currently, two vessels Aeon and Sol have been stopped in India since June 6, 2022 by sellers due to long overdue payments from owners. Aeon is arrested in Mumbai and Sol in Hazira.

Another vessel from the same company Lua has been at the Las Calderas shipyard, Santo Domingo, for five months and was at the Damen shipyard in Curaçao for four months, but due to the unavailability of the owner’s funds, she was asked to leave Curacao shipyard without doing any mooring/repair work, source shared.

A fifth vessel Victor 1 is stopped by the crew due to unpaid wages and also by the seller for long-standing unpaid bills by shipowner Saint James. The total crew of this ship is 17 people, including thirteen Indonesians and four Pakistanis.

Crew members said they were traumatized and needed counseling because of the ordeal they went through. They said they were forced to hand over the ship at gunpoint and flown back to the war zone, putting their lives at risk.

The sailors who are currently stranded have appealed to international maritime organizations and Pakistani authorities to learn about their plight and help them secure their unpaid salaries and provide them with safety and rescue.

HEAT WAVE: How sea temperatures around Spain are rising and threatening marine life