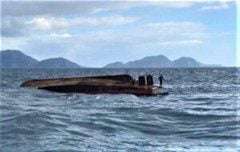 The search resumed on Monday for five of the seven crew members who were on board a St. Vincent and the Grenadines-registered freighter that capsized on Saturday in the Caribbean Sea off Trinidad and Tobago.

Two of the crew of the vessel MV Fair Chance were rescued by a passing motor boat and taken to Trinidad. In a statement, the Trinidad and Tobago Coast Guard (TTCG) said that with the help of Venezuelan authorities, they hope to find the remaining five crew members alive.

The TTCG said the MV Fair Chance capsized about five nautical miles north of Monos Island on Saturday and the crew members were from Carriacou, Grenada and Union Island, one of the Grenadine Islands of Saint -Vincent and the Grenadines.

“The vessel named Fair Chance, which comes from Saint Vincent and the Grenadines, encountered rough seas on the north coast and then capsized due to shifting cargo on board. Two of the seven people on board were rescued by a passing vessel and taken to Staubles Bay for treatment.

“The Trinidad and Tobago Coast Guard immediately became involved in a search and rescue operation and it is confirmed that two of the seven people on board have been found and brought to safety. The others have not yet been found but the operation is continuing,” National Security Minister Fitzgerald Hinds said.

“During the night, the ship was moving through the waters. He moved to Venezuelan jurisdiction (so) contacts were made with the Venezuelan authorities and they played their part because we all have obligations in terms of search and rescue. I know from the latest report I have that the Trinidad and Tobago Coast Guard is assembling all the help and support we need,” Hinds said.

South Grenadines MP Terrance Ollivierre said the Union Island community was in mourning and heartbroken after hearing about the tragic incident.

“I have spoken to the captain’s wife so far and she is very upset by what has happened and a number of people in St. Vincent and the Grenadines are in disbelief,” Ollivierre said.

“It is truly a tragic situation and, as I said, the Grenadines and especially the people of Union Island, the whole mood on the island has changed, so everyone is sitting and is waiting for the information he can gather on what happened,” added Ollivierre.