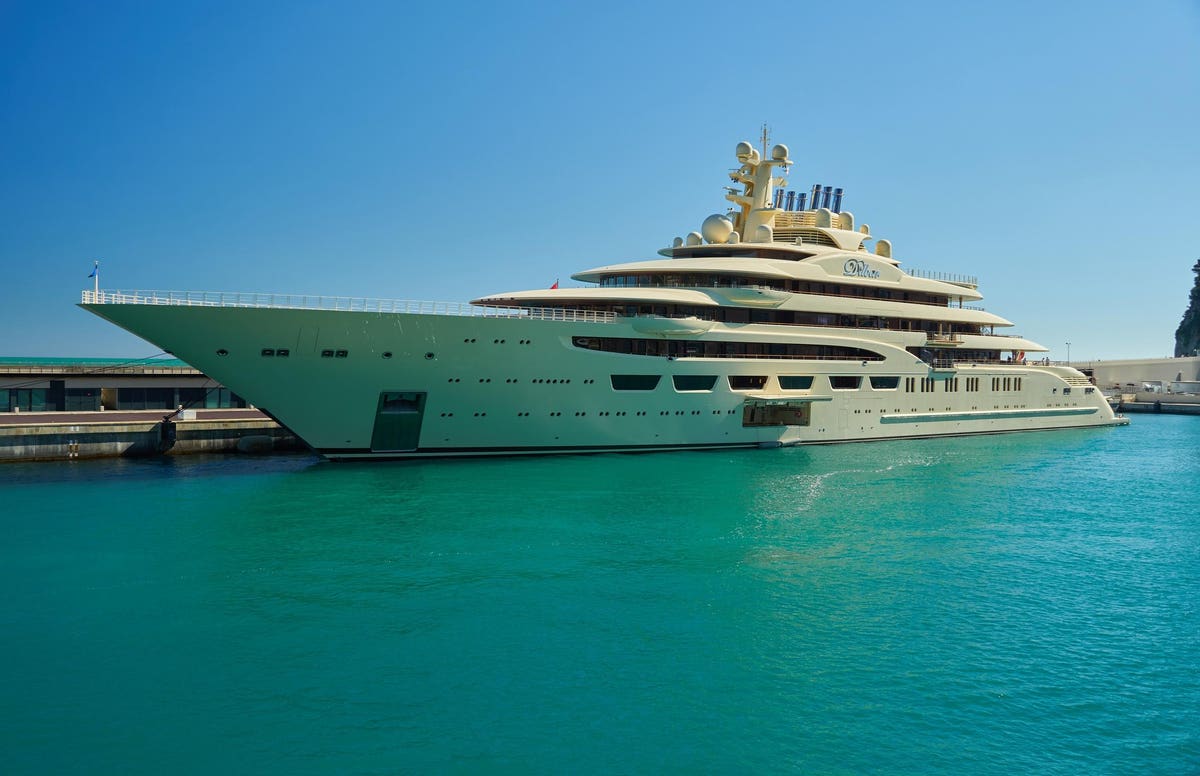 The company that employs the crew of Russian billionaire Alisher Usmanov’s Dilbar superyacht fired its employees on the yacht on Monday due to US and EU sanctions, according to an email sent to the crew that was obtained by Forbes.

The 512ft yacht worth nearly $600million has been stuck in a shipyard in the German port city of Hamburg since October for refitting work. Usmanov, an early investor in Facebook, was sanctioned by the EU, US, UK and Switzerland last week. The message sent by UK-based Sarnia Yachts, the company which normally employs the crew of 96, said ‘normal operation of the yacht has ceased’ and the company is no longer able to pay the wages of its employees on the yacht.

The email also explains the reason for the layoffs: “The implications of these sanctions have resulted in a number of companies supporting the crew being unable to continue normal operations.” This means that the employment of the crew “cannot continue due to the sanctions imposed”. Although Sarnia can no longer pay the crew directly as a result of the sanctions, the email indicates that final wages will be paid directly by the owner of Dilbar: “Due to these sanctions, Sarnia Yachts is unable to pay our salaries, we expect these salaries, including any unpaid leave due, to be paid to your accounts from the ship. »

Instead, a small crew employed by German shipbuilder Lürssen will take care of the ship’s “safety and security”. Spokesmen for Usmanov and Lürssen, which owns the Blohm+Voss shipyards where Dilbar has been stationed since October for a refit, declined to comment. A representative for Sarnia Yachts did not immediately respond to a request for comment.

According to a yacht industry source who spoke to Forbes on condition of anonymity, Lürssen is unlikely to violate sanctions by employing a smaller residual crew. This is because the company has a duty to ensure that the basic security of the huge yacht is maintained while it remains in the company’s shipyards. Another source said Forbes that it is normal for a skeletal crew to remain even after a yacht has been frozen, as ships of this size cannot be left unmanned. Dilbar is currently covered in a tent in a drydock, which means he won’t be able to leave anytime soon. It would also require an export permit to leave and will not be allowed to leave the port, according to the Ministry of Economy and Innovation of the German state of Hamburg.

Usmanov, who owns the Cayman Islands-registered yacht through a Malta-based company, does not pay the crew directly. Usually, companies like Sarnia enter into service agreements with a third party who issues contracts to the crew and then sends monthly invoices to the yacht owner. The ownership structure also makes it difficult for the German government to tie Dilbar directly to Usmanov for sanctions purposes.

Salaries for yacht crews range from around $3,300 a month for a deckhand to nearly $33,000 for captains of a Dilbar-sized vessel. Before the Russian invasion of Ukraine brought yachts owned by Russian oligarchs into the spotlight, there was a shortage of yacht crews around the world. That means it shouldn’t be too difficult for the former Dilbar crew to find jobs elsewhere.

Yet the proliferation of sanctions and seized yachts – Italian authorities on Friday froze two yachts belonging to sanctioned Russian billionaires – means other businesses could soon face the same problems as Sarnia on Dilbar. According to one of the sources who spoke to Forbes, other companies are already taking steps to prepare for possible sanctions against the ultimate owners of the yachts where they employ crews. This includes the creation of new offshore companies used to pay employees, further alienating companies from Russian yacht owners who may be sanctioned by Western countries.

Antarctic marine life adapted to the cold. Now the ocean is getting warmer