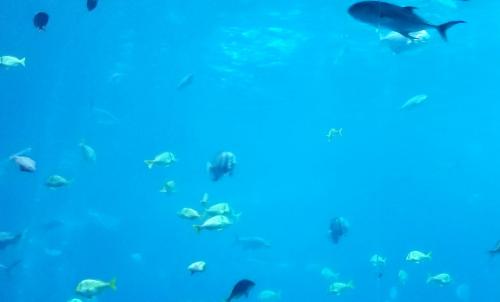 Unlike light, noise travels long distances and can travel amazing distances in water. In 1943, the SOFAR (Sound Fixing and Range) channel, a horizontal layer of water in the ocean at which the speed of sound is at its minimum, was discovered. The SOFAR channel was capable of transmitting low frequency, long wavelength sound waves produced by an explosion near the Bahama Islands to receivers stationed near the African coast. Sound waves in the narrow SOFAR channel that travel at minimum speed can be up to 15,000 miles or more. Unfortunately for those who live in the ocean, that means their world has become noisy – very noisy.

On February 5, 2021, Duarte et al., Published “Noise pollution: the soundscape of the anthropocene ocean” in the review Science. A soundscape is an acoustic environment and a wide variety of noises make up the soundscape under the oceans of the world. Weather conditions, such as storms, wind or rain falls, and geological processes, such as earthquakes or underwater volcanoes, are geophony; natural sounds made by animals and organisms, such as vocalizations, cries, trills, flapping fins, etc., are biophony. And then there are humans – the sounds that we and our human activities contribute to the soundscape are called anthropophony.

One of the most widely recognized incidents representative of the impact of human sound on marine life is the stranding in March 2000 of seventeen marine mammals (16 whales) in the Bahamas. The animals had washed up in and around the islands, some with bleeding ears; six of them were dead. After learning that this happened very soon after U.S. Navy destroyers used sonar in training exercises nearby, government scientists launched an investigation. An interim report released in December 2001 concluded that the strandings were due to several factors, but admitted that the sonar pulses likely stunned the mammals, causing confusion and disorientation.

The noise of the expedition … and everything in between

Duarte said shipping has grown so much over the past 50 years that it has contributed to an estimated 32-fold increase in low-frequency noise found along the world’s major shipping routes. Sailing noises interrupt sea creatures in a number of ways, including disrupting their movement, foraging, socialization, communication, rest, learning to avoid predators, etc. Other sounds that enter ocean waters can include:

Studies clearly show that noise pollution compromises hearing ability, induces physiological changes, induces avoidance actions and displaces marine animals. But, as Duarte pointed out, unlike other sources of pollution, noise pollution in the ocean does not persist after the source is removed – and the positive effect of its removal is almost immediately realized.

Legislatively, it is recognized, but there is no stick.

In the United States, the National Research Council (NRC) of the National Academy of Sciences has published reports in 1994, 2000, 2003 and 2005 that addressed the issue of ocean noise and marine mammals, and there has been recognition of the extent of the ocean noise problem by several federal agencies (e.g., National Marine Fisheries Service (NMFS), US Fish and Wildlife Service (USFWS) and the Natural Resources Defense Council (NRDC) At the international level, Section V, Article 145, of the United Nations Convention on the Law of the Sea (UNCLOS), entitled Protection of the marine environment states, in part, that “the necessary measures shall be taken [by the coastal State]â€¦ To ensure effective protection of the marine environmentâ€¦ â€and thatâ€œ appropriate rules, regulations and procedures â€should be adopted forâ€œ the prevention, reduction and control of pollution and other hazards to the marine environment â€. It does not specifically mention noise as a pollution, but it specifically mentions the “harmful effects of activities such as drilling, dredging, excavation, waste disposal, construction and operation or maintenance of facilities, pipelines and other arrangements linked to these activities â€.

Technologically, there is some progress.

For example, seismic surveys done by oil and gas companies to map what lies beneath the ocean floor are done with shock waves fired from an air cannon toward the seabed, and it’s extremely loud, like an explosion. But there is a technology called vibroseis that could be much less harmful. Currently, there are large energy and petrochemical companies that have a prototype of marine vibroseis in development, only needing additional testing before using it in the field. Their study is published in Geophysical exploration. On a smaller scale, in 2015, an international shipping company remodeled parts of five of its large container ships. They found that when they reduced the cavitation of the propellers of these ships, the low-frequency sound pressure levels were reduced by 6 to 8 dB – in addition, they improved their fuel efficiency. See science in Ocean engineering.

So, although some gains have been made, other methods of restoring peaceful ocean environments must be implemented and the nations of the world must come to an agreement. According to Duarte, incorporating solutions that politically and technologically mitigate human noise in the ocean into binding international conventions “would pave the way for ocean soundscapes that support healthier ecosystems in a sustainable ocean economy.”

Government zoning bias has put marine life at risk since 2012