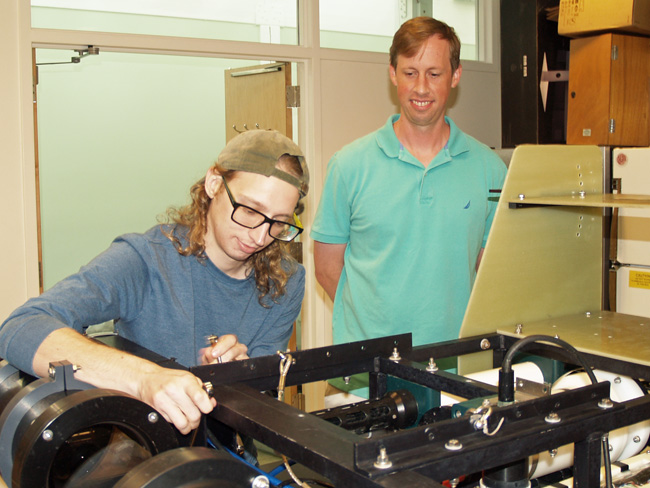 Adam Greer, a biologist at the University of Georgia’s Skidaway Institute of Oceanography, studies marine life from the bottom up (i.e. the food chain). Greer studies plankton – organisms ranging in size from about a millimeter to several centimeters – adrift in the water column. It uses a new state-of-the-art imaging system that reveals more of this microscopic world than ever before.

Greer’s lab group currently focuses primarily on gelatinous organisms, what they eat, and how they move in ocean currents. Most are very small and often go unnoticed, and therefore very misunderstood. However, they are an important part of the marine ecosystem and, depending on the particular species, they can play different roles. Some gelatinous species also impact populations of much larger animals, such as fish, by eating their larvae.

“Seafood is a multi-billion dollar industry, so it’s pretty important to understand the fundamental processes that affect fish populations,” he said. “There are a lot of fish larvae there. Many of them are eaten by predators, and we don’t really know at what rate and what types of environmental factors might influence this mortality and ultimately abundance.

Traditional sampling methods, such as towed plankton nets, are valuable because they provide a tangible sample for analysis. However, they cannot provide a picture of marine organisms in their natural environment and allow scientists to observe their interactions. To do this, Greer and his fellow researchers use a high-tech imaging system towed behind a research vessel. The In Situ Ichthyoplankton Imaging System and similar iterations of this instrument (like the mDPI pictured above) record thousands of high-resolution images of marine organisms along with the precise location of each individual at depth.

The imaging system is built around two modules with a camera in one module and a light source in the other. When towed through the water, plankton flow between the two pods and, if plankton is present, each individual blocks light from reaching the camera. The camera picks up plankton shadows that scientists or computer algorithms can identify. The system allows scientists to look at a large volume of water because all shadows are sharp. 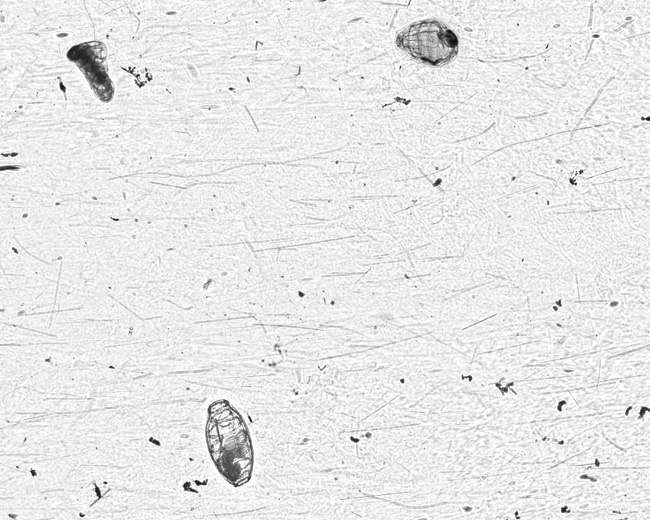 An image from the Ichthyoplankton In Situ Imaging System showing several planktons, including 3 gelatinous barrel-shaped animals known as doliolids.

“If you’re interested in gelatinous plankton, fish larvae, things like that, they’re not that common compared to other plankton,” Greer said. “And so you actually have to look at a lot of water to find these types of organisms. If you look at too small a volume, you won’t really come across things that are relatively rare in the plankton world like fish larvae and gelatinous organisms.

The typical abundance of fish larvae is one individual per approximately 250 gallons of seawater, but there is a wide range observed in different marine ecosystems.

Researchers can see what each individual is experiencing in the environment and where they are in the water column. They can also observe characteristics of their environment such as temperature, salinity and dissolved oxygen concentration.

“That’s a lot of information that we were missing until now,” Greer said.

The imaging system also provides insight into organisms that share the same space and how they interact. Which species is a predator and which species is the prey? Which organism is a parasite for another? How do organisms move from one set of ocean conditions to another as they go through their life stages?

Greer says every deployment is an adventure.

“Every time we put it in the water, I feel like I see something new and unexpected. And so that’s really the exciting part of these camera systems is that it This is truly a new take on how ocean life interacts with each other and with the environment.

Greer recently published the results of some of his work in the ICES Journal of Marine Science. The document can be viewed at https://academic.oup.com/icesjms/advance-article/doi/10.1093/icesjms/fsab149/6350848