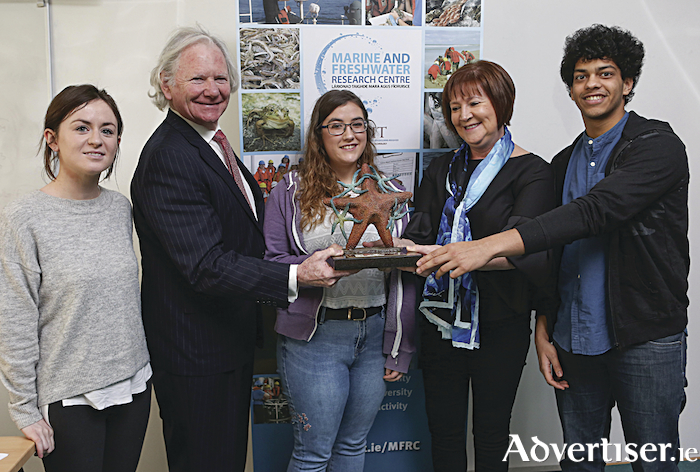 The scholarship is named after the late John Costello, former NUIG speaker and founder of successful environmental consultancy Aquafact, who died in 2016 at the age of 59.

Catherine Costelloe, speaking at the launch of her late husband’s Memorial Scholarship, hoped the award would encourage and help students through their academic life.

â€œThe John Costelloe Memorial Award perpetuates John’s passion for understanding, developing, managing and protecting the environment,â€ she said. â€œThe family and the company hope that John’s drive to make the world a safer and more sustainable place will inspire future students in their work.

The new scholarship consists of a sculpture by John Coll, who was a friend and former colleague of John Costelloe, and an annual stipend, both sponsored by Aquafact. Seamus Heaney’s lines are engraved on the â€œBelieve the Other Shore is Accessible from Hereâ€ sculpture.

The scholarship is open to second year students of the Applied Studies in Freshwater and Marine Biology program at GMIT and will be awarded to the student with the highest score at the end of the academic year.

Dr Heather Lally, Lecturer in Freshwater Ecology and Biology, GMIT, said John Costello has been a long-time supporter of students and learning and “has tirelessly given of his time and energy to the students they he met in his professional life “.

“I am delighted that we have the opportunity, along with Aquafact and John’s family, to recognize the abilities and skills of the student who will receive this award.”

John Costello founded Aquafact in 1986, and 30 years later it was Ireland’s oldest marine environment consultancy, while also working in over 20 countries on four continents.