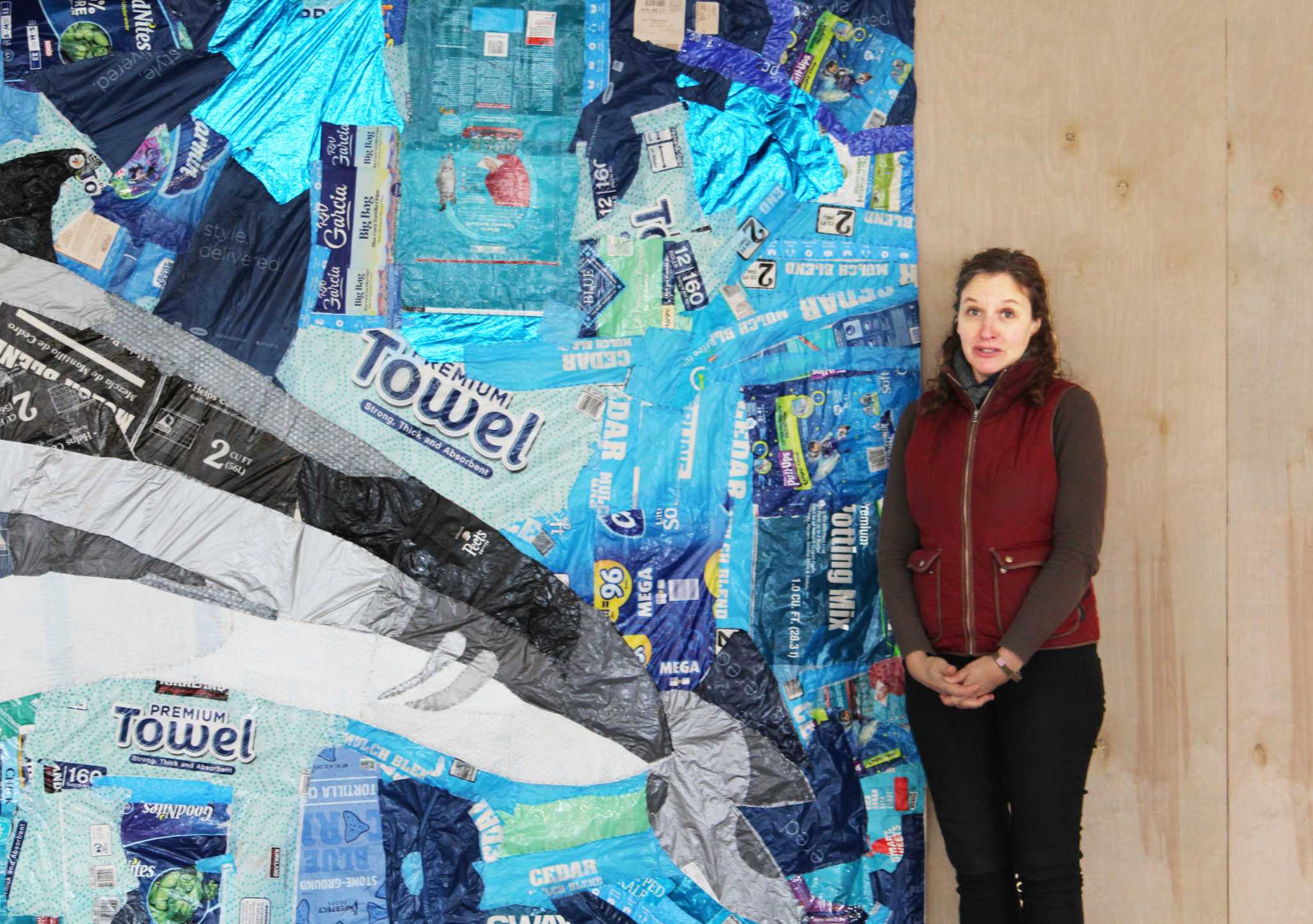 MIDDLETOWN – Volunteers have a unique chance to help create a life-size fabric replica of a sperm whale in the vacant old Woolworth building downtown, using plastic that gets into the oceans and endangers Marine animals.

Kat Owens, a Middletown artist and researcher at the University of Hartford who works on single-use plastic solutions and leads the Quilt Project, is looking for people, including children, to help sew materials onto canvas until to Friday from 10 a.m. to 2 p.m. at 428 Main St.

The sperm whale was designated a state animal by the General Assembly in 1975.

Owens has traveled extensively around the world for his work, including spending six months in India with his family and in Long Island Sound.

“All of a sudden I’m stuck in my house, doing a lot of Zoom meetings, feeling very frustrated,” said the artist, who also felt helpless about the situation. “I was a little overwhelmed.”

Colorful turtles, whales, sharks and other sea animals adorn the walls of the building, most recently home to irreplaceable artifacts. Blue is particularly popular for this particular project.

“It’s really hard to recycle,” Owens said. “It says it’s recyclable, but most plastics aren’t recyclable. The public is probably unaware that, globally, 95% of polymers cannot be recycled, she added.

This includes vegetable and fruit bags. “I’m trying to do something healthy for myself – and it’s like a net wrapped in plastic?” It takes hundreds of years for most plastics to degrade, depending on the conditions, Owens said.

Scientists say that 90.5% of plastics ever made are not recycled.

“It’s supposed to make us feel better,” she said. Companies are “enforcing” customers to properly dispose of plastics, she said.

Some stores accept used grocery bags, but few participate, and it’s unclear what’s made of the plastic, Owens said.

“If you don’t have unlimited money or time, I don’t know how you do,” said Owens, who encourages people to refrain from using product bags by placing items in bags. reusable items made from recycled materials.

Another idea is to shop locally – a way to avoid using unnecessary shipping containers. She also suggests people consider signing up for a community supported agriculture subscription or growing their own fruits and vegetables.

People can reach out to their legislators to encourage them to support the Break Free From Plastics Pollution Act.

“Politics is important, but it’s also about consumers telling the people who make these things that they don’t want them,” Owens said.

The artist ordered Christmas presents for his family online. An order arrived in three packages.

“All the climate miles were accumulated by swiping them around,” Owens said. “We don’t see any of that. Everything is hidden. »

Owens kept her items and brought them to drop off locations, however, she wasn’t entirely comfortable doing so. “Is it as serious as putting it in the trash? It pollutes the whole stream.

She recommends people frequent the new Reboot Eco on River Road, which carries bulk produce, as a way to help the environment.

Owens put away paper towels, diapers, tangerine fillets, pet food, potato chips and other wrappers, knowing she might use them one day.

She consulted a chapter in a book published in 1997 by researcher David Laist, the first person to put together all the records of animals injured by marine debris, Owens said. At that time, there were over 250 species affected by entanglement and ingestion. A later report put that number at 500.

All art is created to scale, she says. It includes an 18-foot minke whale, which local students worked on at summer camp. Webs for the giant whale will be sewn together and displayed.

Owens expects the project to take several months. She would also like to see the exhibit housed in area museums or other locations for broader exposure.

The DBD is being allocated up to $100,000 in American Rescue Act funds to carry out the effort. It includes an exhibit of Haitian art by resident Pierre Sylvain at the former Shlien’s Furniture Co. at 584 Main Street.

For more information, visit the Downtown Business District Facebook page. A calendar of activities is posted on KatOwens.com. Visit the city’s recycling department at middletownct.gov.