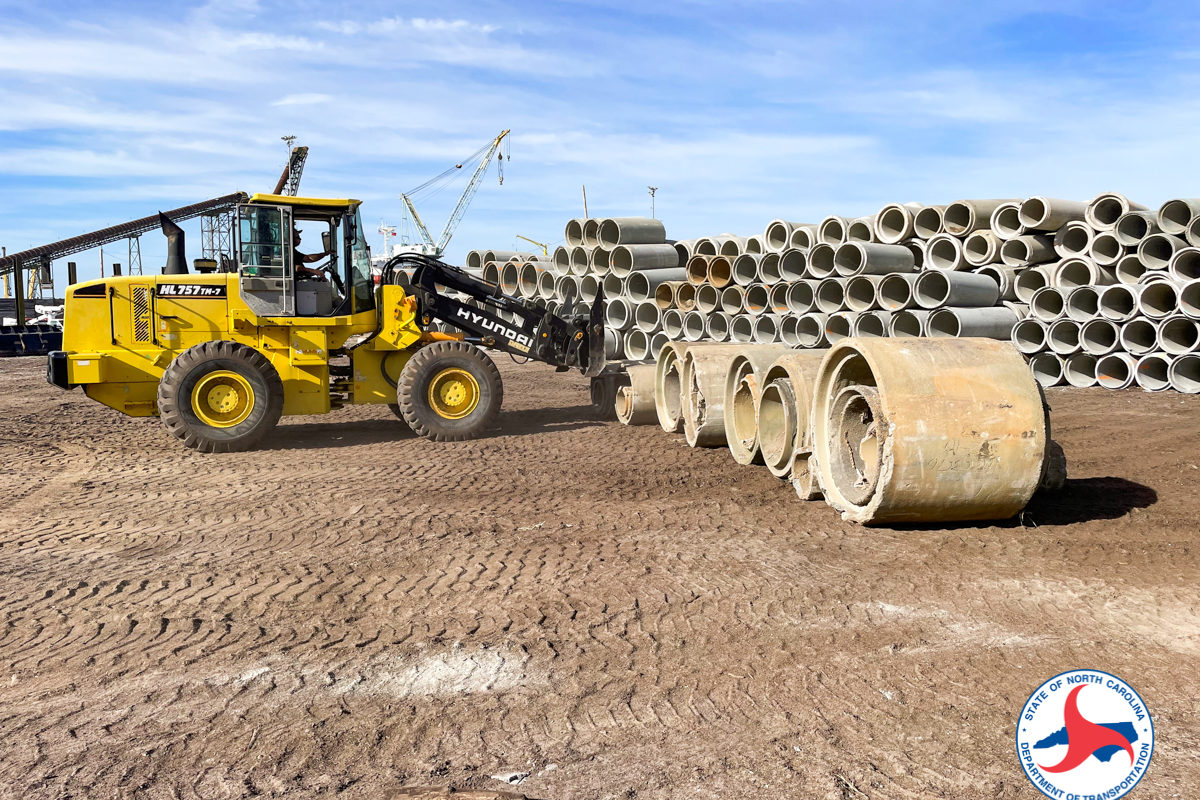 SOUTHEAST NC – A growing collection of unserviceable concrete pipes at the Port of Wilmington, some of which were damaged in Hurricanes Florence and Matthew, will serve a new purpose. The material will become makeshift reefs off the Brunswick County coast later this year.

The North Carolina Department of Transportation is repurposing pipes to support two of the NC Division of Marine Fisheries’ artificial reefs. Once deposited to the sea floor, marine wildlife will outgrow structures as habitats, where commercially and recreationally critical species can spawn and thrive.

One near Oak Island, also known as Jim Knight Reef or AR-430, was originally built in 2013 and now features concrete pipes and an 85-foot barge. The other, closer to Shallotte, is known as Fisherman’s Reef or AR-460. Its materials were first laid in 1996. Today it is the site of train cars, a 330-foot barge, a 40-foot U.S. Coast Guard launcher, balls of reef and piping – all supported by marine life like territory.

Each reef is allowed to be about 160 acres in size, but there is not enough material right now to stretch to the borders, explained Jordan Byrum, the artificial reef coordinator at the division of marine fisheries. Newly introduced material will fill in the blanks.

“We’re going to use the whole pipe, and the reef will still have room to grow in the future,” Byrum said.

Since 2010, partly accelerated by an “aggressive pipe replacement” program, the NCDOT has accumulated more than 1,000 tons of crumbling concrete pipes. Before resurfacing a road, the NCDOT checks the condition of its cross pipes and looks for flow problems.

“Those that need to be replaced are before the resurfacing work,” NCDOT spokesman Andrew Barksdale wrote in an email. “In years when the budget is good, the combined Bladen/Columbus maintenance forces have replaced over 100 pipes in any given year, as budget permits.”

Some of the culverts were part of replacement projects following Hurricanes Matthew and Florence. The NCDOT conservatively estimates that 15-20% of the collection was either directly damaged by a hurricane or felt to be an indirect result, as high flows accelerated deterioration, with problems becoming evident months later.

Instead of spending $65,000 in landfill dumping fees, NCDOT staff hauled the concrete to maintenance yards in Columbus and Bladen counties. (Metal pipes are easier to recycle.) The piping was then transported to land temporarily leased from the North Carolina Marine Fisheries Division by the Port of Wilmington.

More than 100 tons in Bladen County were sent to port in late February, and the Whiteville base had more than 1,000 pieces of pipe. The port is also stockpiling damaged concrete from commercial factories for the same reef project.

To construct the artificial reefs, NCDOT obtained a federal permit from the Coastal Management Division and the Army Corps of Engineers. Bids will soon be out for a marine contractor to haul and offload the materials, either this spring or early summer.

Since these add to existing reefs, it’s likely there will be action on the structures within minutes, Byrum said.

“Just before Hurricane Florence, we sank a tug near Pine Knoll Shores, AR-320,” Byrum said. “I was diving. Maybe 30 minutes, 45 minutes after hitting the bottom, there were already fish on the tug. It doesn’t take that long.

The initiative is a partnership between NCDOT and the state Division of Marine Fisheries to find cost-effective ways to utilize discarded pipe, rather than letting the materials go to waste and clog landfills.

Whiteville-based NCDOT engineer Ken Clark said the idea came to him at a coastal resilience conference, where he learned that the Marine Fisheries Division was able to reuse precast concrete pipes. barrel-shaped to complement its artificial reefs.

“We considered many options on how to properly dispose of this unusable material when we formed this unique collaboration with the Division of Marine Fisheries last year,” Clark said in an NCDOT press release. “This program mutually benefits both state agencies.”

The NCDOT was able to work in-house to transport the items, a saving for the Marine Fisheries Division. The division allocates between about $175,000 and $200,000 to trucking companies to move items from commercial plants — not NCDOT’s — to port property. It is estimated to cost between $200,000 and $300,000 to load all the materials onto a barge to take it off the coast on three different trips.

The division maintains 43 artificial ocean reefs, scattered along the coast. All less than a mile to 38 miles from shore, the reefs are within reach of nearly any entrance to the state, according to the division.

The artificial reefs are also ideal fishing grounds, where boaters can catch grouper, king mackerel and flounder. People can find information about reef locations and best catches on the North Carolina Division of Marine Fisheries website.

Want to know more about PCD? Subscribe now, then sign up for our morning newsletter, Wilmington Wire, and get the headlines delivered to your inbox every morning.