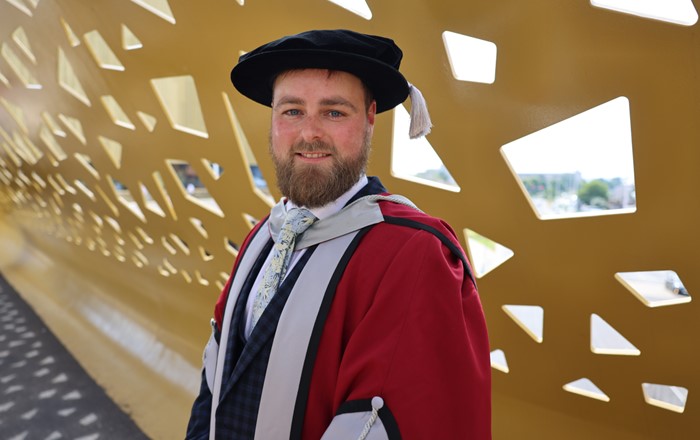 A marine biology student who chose Swansea University for his bachelor’s and master’s degrees has achieved a hat-trick by earning a doctorate in biological sciences.

William Kay, 30, is from Penrhyn Bay. He was awarded his doctorate at the University’s graduation ceremony for his research into the impacts of marine renewable energy developments on seals. This project involved tracking wild seals in Wales and Germany with beacons that Will had built himself.

All of Will’s studies took place in the Department of Biosciences at Swansea University, which was ranked 3rd in the UK for Student Experience by The Times in 2021.

Will explained the research he conducted for his doctorate: “We are facing a climate emergency. Green electricity generation, such as marine renewable energy (MRE), is a crucial way to address this. However, MRE developments may threaten some of our most important marine life, including seals.

“I studied the behavior and movement of seals, monitoring them using bio-recording devices developed at Swansea University. These allowed me to assess the potential risk posed by the MRE developments and help recommend mitigation measures to minimize damage My findings will help protect marine life and support the MRE industry.

Will began his decade-long career at Swansea in 2010, studying BSc (Hons) Marine Biology. This practical degree saw him undertake a range of field activities, including time at sea on the Swansea University research vessel.

In the final year of his undergraduate course, Will won a Swansea Employability Academy Award, allowing him to travel to Patagonia to undertake his dissertation on the foraging ecology of Magellanic penguins. Will graduated with first class honours, winning the Graham Ralston Memorial Prize in Marine Biology.

After winning a postgraduate scholarship, Will returned to Swansea University to study an MSc (Res) in Animal Movement Science in 2014. This led him to research the movements and behavior of diving harbor seals in Germany.

Will then undertook his PhD, during which he presented his research at numerous international conferences, including in Denmark, Italy and Belgium. He has also established interdisciplinary collaborations, for example with aerospace engineers to design hydrodynamic animal tracking beacons.

Outside of his studies, Will spent his free time at the Swansea University Sub Aqua Club (SUSAC) where he learned scuba diving. He trained as an instructor and became a key member of the club, as captain and equipment officer.

Along with this he lived and worked on the Singleton campus as the Director of Welfare providing support to new students. He has won an Ede and Ravenscroft Award for Outstanding Contribution to Student Life and was an Honorary Life Member of Swansea University Students’ Union. Additionally, in the final year of his studies, Will was invited to become a member of the Worshipful Livery Company of Wales.

Alongside his PhD, Will undertook a six-month science policy sabbatical at the Royal Society. He also qualified as an HSE diver and commercial skipper and used these qualifications in his professional roles as Navigation Officer and Research Technician for Swansea University research projects; SEACAMS2 and Seagrass Ocean Rescue.

Will now works at Cardiff University as a Data Analysis and Statistics Tutor, teaching in the School of Biosciences.

Reflecting on his time as a student at Swansea, Will said: “My years at Swansea were the most formative of my life and I had a blast! I am extremely grateful to Swansea University for molding me into the person and professional I am today, and for giving me a solid foundation from which to pursue a successful career in higher education. .

Find out more about biosciences at Swansea