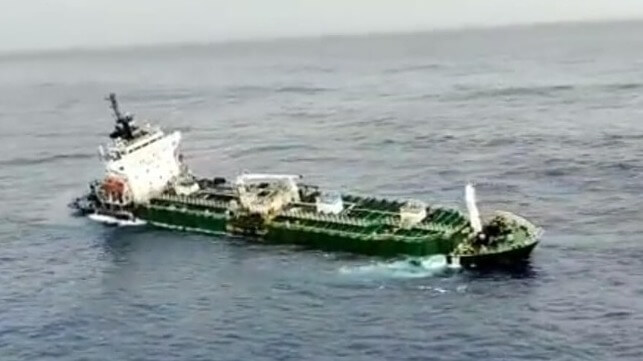 The Indian Coast Guard has rescued 22 crew from an oil tanker in the Arabian Sea. They have all been safely transferred to Porbandar in north-west India in what the coastguard calls a ‘swift rescue operation’.

The product tank World King 1 (6,694 dwt) left the UAE at the end of June carrying 6,000 tonnes of bitumen, a by-product of oil production. The tanker, which was built in 2007, was due to arrive in the Indian port of Karwar on July 7. Registered in Panama, the tanker was 386 feet long, with a crew of 20 Indians and one from Pakistan and Sri Lanka.

“At approximately 8:20 a.m., ICG received a distress alert regarding uncontrolled flooding aboard the merchant vessel Global King 1,” a Coast Guard statement said. “The vessel is believed to have been 95 nautical miles off the coast of Porbandar. ICG responded immediately and alerted all stakeholders.”


In a rapid rescue operation, the 22 crew members of the stricken vessel MT Global King were rescued by @IndiaCoastGuard #Boat and #ALH launched from #Porbandar 93 NM into the sea. All crew safe. @DefenceMinIndia @shipmin_inde @MEAIndia @PMOIndia @MoD Spokesperson pic.twitter.com/KVmjsFclsI


The cause of the flooding on board the vessel was unclear but when an Indian Coastguard aircraft arrived on the scene they reported the vessel was listing while the crew told them they were unable to control the flood. The reconnaissance aircraft dropped an inflatable life raft and the crew decided to abandon ship.

A Coast Guard patrol boat operating in the area also visited the scene. He was assisted by one or more helicopters, including an ALH Dhruv helicopter newly commissioned in the country.

Brief video of the rescue released by the Coast Guard shows one of the helicopters on top of the lift raft which has drifted a significant distance from the distressed vessel. The crew would have been brought ashore in the helicopters and on board the patrol boat.

Made from recycled marine waste, Akasa Air’s crew uniform is chic and comfortable.