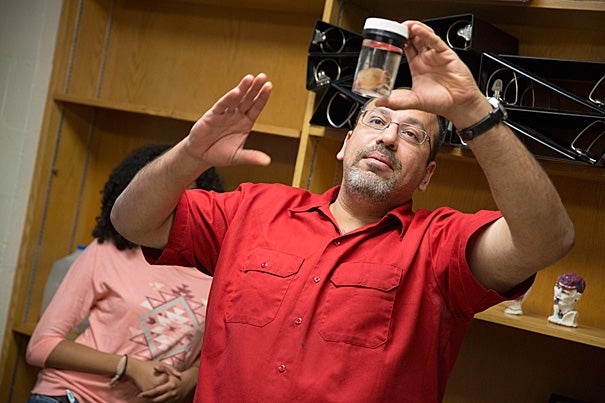 The ocean contains 97% of the Earth’s water and covers 71% of the Earth’s surface. Twenty percent of the protein consumed by the human race comes from the ocean. Yet more than 95 percent of the ocean remains unexplored. In fact, we have seen more of the surface of the moon – which is about 240,000 miles away – than we have seen from the bottom of the ocean, which is seven miles deep.

According to Peter Girguis, professor of organic and evolutionary biology (EPO) at Harvard University, the various challenges of the ocean, the unexplored terrain, the enormity and the great importance in matters such as transport, trade, l food and even climate change make the study of marine science more relevant today than ever before.

He urged students to think outside the box, telling them that marine science is not limited to the study of fish. It’s interdisciplinary; it involves chemistry, biology, physics, engineering and even computer science.

For example, the ocean, he said, plays a huge role in climate change. Its ability to absorb heat means it has the potential to dampen changes in temperature. “This will help to some extent, but the problem is, we just don’t know how fast it will work. Hundred years? A thousand years? It’s hard to say, and we also don’t know how – and how quickly – [climate change] will affect all marine life.

In addition to careers involving marine science and climate change, students, he suggested, might consider building robots that would sit on the ocean floor and send critical data ashore. Still others might explore ways to use the ocean more efficiently for trade and global affairs, such as developing ships that could move goods from one place to another faster, or outsmart the competition by discovering and using new shipping routes.

â€œThere are a lot of ocean job opportunities, you just have to keep an open mind,â€ Girguis said.

High school students spoke to Girguis graduate students and toured the EPO biolabs, learning about some of the ongoing projects being carried out by the Girguis team.

Earlier today, they visited the Harvard Museum of Natural History, where they explored various specimens and examined swimming underwater robots.

The collaboration between Girguis, professor of marine biology at CRLS Paul McGuinness, M.Ed. ’06, and high school kids are nothing new. Last spring, three CRLS marine biology students spent the semester with Girguis and his graduate students conducting research in Harvard laboratories. The internship program will continue into next spring, and there is a desire on both sides to expand and broaden the program.

“It’s a huge addition to the program for CRLS marine biology students to be able to visit a world-class research lab at Harvard and speak directly to researchers like Dr Girguis and his team,” McGuinness said, noting the high marks that students gave to La ConfÃ©rence de Girguis and his willingness to engage them directly. â€œThey were also impressed with the range of high profile projects the graduate students were working on,â€ McGuinness said.

“I had a great time! I loved seeing how passionate Professor Girguis is about his research and I really enjoyed hearing him explain how and why he decided to get into the field of biology marine, â€said Eleanor Lieberman, 17, senior at CRLS.

Girguis, one of the world’s most respected marine biologists, explained his rather unconventional entry into the field.

â€œI grew up in Southeast Los Angeles,â€ he says. â€œI didn’t hang out with movie stars or sail on my yacht. We didn’t have a lot of money. Most of the people in my town worked in a local factory that made the Apollo moon rockets. When I was a kid I would go there and they would let you sit in a simulator for free – and pretend you were in control of the rocket. This is the first time I realized that anyone, no matter who you are or where you are from, could be a part of great things if you work hard enough and want them hard enough.