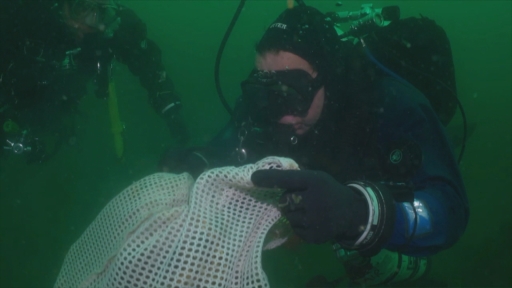 This dolphin died off Cornwall after getting tangled in old fishing nets.

But unfortunately, this is not an unusual sight.

Lost or abandoned fishing gear is considered by environmentalists to be the most damaging plastic in our oceans because it continues to fish long after it is lost.

â€œFishing nets are made of nylon that will persist for hundreds of years in the marine environment if lost,â€ said Matt Slater, Cornwall Wildlife Trust.

“It’s really sad, but a lot of the reefs and wrecks around Cornwall are decorated with stray fishing nets and the amount of gear is pretty scary.”

It is estimated that over 640,000 tonnes of fishing gear are lost at sea each year.

“He will continue to catch and kill”

But a group of divers in Falmouth are helping turn the tide.

Members of the Fathoms Free charity spend their free time locating and removing so-called â€œghost netsâ€ from the sea.

It only takes a few minutes for divers to find an area covered with old fishing nets.

â€œYou can see he looks like he’s spent a little time there because he’s got a bit of growth on it and it’s slightly discolored, but basically it’s not damaged.

He is still very strong and he will continue to catch and kill. It’s very sad that he shouldn’t be here. It’s plastic – it’s really harmful to marine life.

Cornwall has one of the highest seal entanglement rates in the world.

â€œI have an example here of a piece of netting that we pulled from a seal a few years ago here in Cornwall,â€ said Dan Jarvis.

â€œIt doesn’t sound like much but it’s enough to kill. If it gets stuck around their neck, unfortunately they can’t remove it and that leaves these really horrible injuries.

“It’s a tough material, it’s built to last, so it’s very hard to break and this type of material can last hundreds of years in the environment and kill many animals in its lifetime.”

After saving many seals, Dan said people need to start picking up any old nets they see washed up on the beach.

â€œHand on heart, you could save a life by doing this,â€ he added.