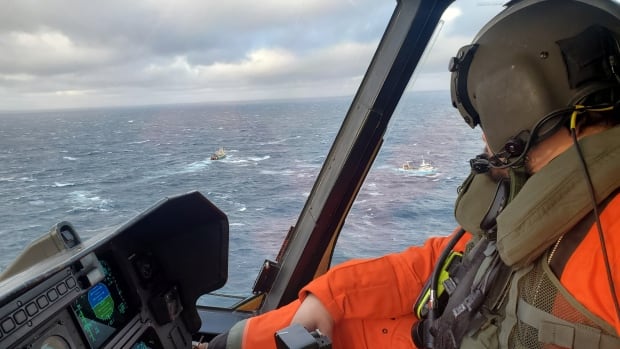 The search for missing crew members of the Spanish fishing vessel Villa de Pitanxo, which sank 460 kilometers off the east coast of Newfoundland early Tuesday morning, has been called off.

According to Lt. Cmdr. Brian Owens of the Joint Rescue Coordination Center in Halifax, 12 of the crew of 24 were still missing as of 4 p.m. Wednesday afternoon. Three people survived, while nine bodies were recovered from the ocean.

At 21, it is the largest loss of life at sea off Newfoundland in more than two decades.

“The decision is never taken lightly. It is extremely difficult to come to that conclusion, but unfortunately all the evidence now indicates that the survivability is not there,” he told CBC News Wednesday afternoon.

Owens previously said 10 people were killed in the accident, but issued a correction on Wednesday afternoon.

Among the survivors are the ship’s captain, 53, and his 42-year-old nephew, according to Spanish newspaper La Voz de Galicia.

The CCGS Cygnus remained on scene overnight, assisting other fishing vessels. Hercules and Cormorant planes returned to the area to help on Wednesday, but Owens said deteriorating weather conditions and low chances of survival helped call off the search.

“We are now over 36 hours of searching for sea states in 10 meter waves, 45 knot winds, freezing water in the North Atlantic in February, which is an inhospitable environment.”

The search covered 900 nautical miles, Owens said, with no signs of Villa de Pitanxo or indicators that could help find the missing crew members.

The 50-meter-long Villa de Pitanxo operated from the Spanish province of Galicia. On Tuesday, Owens said the JRCC learned of a distress beacon from a fishing boat about 250 nautical miles, or 460 kilometers, east of St. John’s shortly after midnight.

Alberto Nunez Feijoo, head of the province of Galicia in northwestern Spain, told reporters that two Galician fishing boats were in the area at the time and were part of the initial recovery. Two life rafts were on board the Villa de Pitanxo. The three survivors were on one.

Sixteen Spaniards, five Peruvians and three Ghanaians are part of the crew. The families of the missing men have been notified that the search has been completed, Owens said.

Cristina Porteiro, a journalist with La Voz de Galicia, told CBC News on Wednesday that many families in the area have been affected by the tragedy.

“We depend on fishing…a lot of families are linked to this sector,” she said.

“It’s a very, very important area for the local population.”

Porteiro said at least eight of the crew were from Galicia and the captain and his nephew had been in contact with their families.

Tuesday’s sinking came as a shock to much of the community, Porteiro said, and it’s an occurrence that has become increasingly rare for those connected to the fishing industry.

“We saw crashes in the 60s and 70s, but not in the 90s or recent years because the industry has improved,” she said.

“The construction of the ships, the safety on board. It’s really, really weird, really strange what happened. And we don’t know what really happened yet.”

Plymouthians from disadvantaged areas can connect to sea life for free