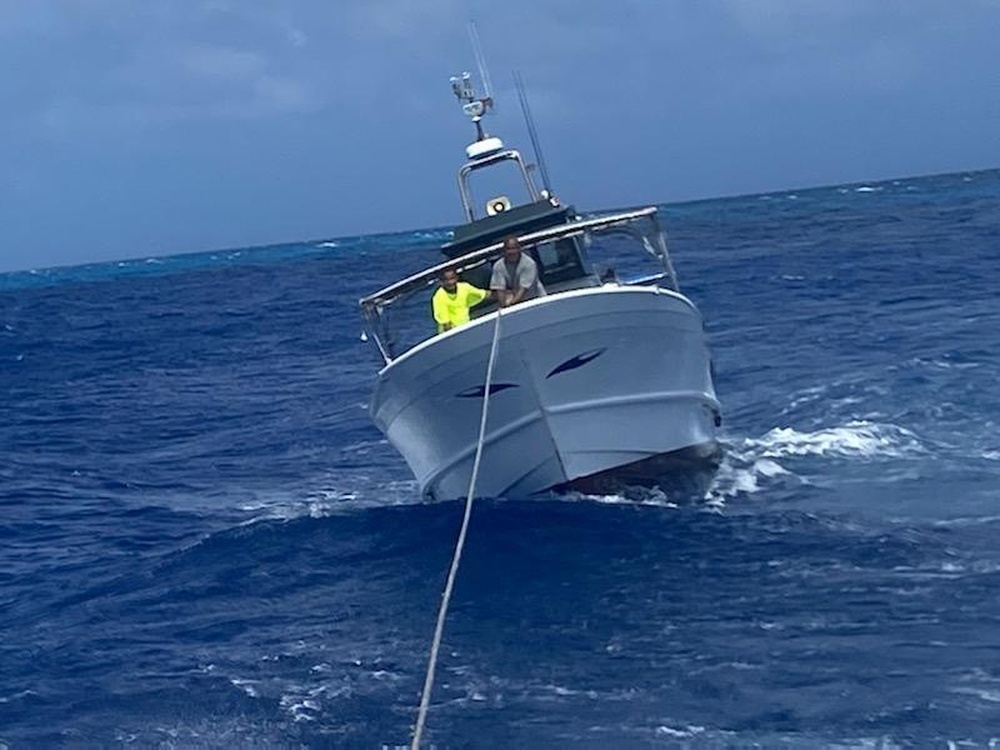 While engaged in a routine mission in Legan, the crew of LCM-8605 picked up a faint distress call, the Navy Department said in a statement.

The Laintok, a fishing vessel chartered by the Marshall Islands Marine Resources Authority carrying passengers from Ebeye to Enniburr, derailed after mechanical failure. The boat and its passengers were adrift at the edge of the ocean, north of Eller’s Island.

In the rough seas, their captain said they needed help to continue their journey safely. Despite their weak radio signal, Captain Switon Tanaka was able to communicate with the Marshal’s captain of the Laintok. He asked about the health of the many passengers on the Laintok. Among them were children, employees of the RMI garrison and family members. None were reported injured.

“They said most of them were seasick, but they were all still in good shape,” Tanaka told captain Brent Evans.

After gaining permission to respond with the assistance of Kwajalein Port Control, the LCM sailed through 29 knot winds to the Laintok. They faced tough conditions on the water, Evans said, including nine-foot-high waves.

“The transition in and out of passes, especially when it’s windy like that — and because of the islands and the reef structure — makes the water really pick up,” Evans said.

After drifting into Eller’s shallow waters, Laintok’s crew had anchored at a sweet spot – a solitary coral head surrounded by deeper water – in a strong current. Their precarious luck held until the arrival of the LCM.

Along with engineer Aita Bien and deckhand Fedner Capelle, Tanaka and Evans worked with Laintok’s three-man crew to tow the boat to Eller’s calmer, lee side. Then they retrieved Laintok’s main anchor and rode, or the anchor line, the Navy Ministry said, to ensure the ship could hold its position until help arrived. The LCM waited with the ship until three RMI government boats arrived on scene and took the passengers home safely.

Evans credits Tanaka’s skill as a captain for the success of the rescue.
“It was pretty impressive what he did with the boat,” Evans said of Tanaka’s careful maneuvering with the lightweight LCM as he took the safer approach to the Laintok. “At one point, the waves pushed us against them so much, [that Tanaka] had the rudder all the way along the starboard side, and the bow always swayed the other way. Our wheels came out of the water once, trying to reach them.

Tanaka is grateful to the LCM and Laintok crews for their close teamwork and the opportunity to help a ship in distress.

“Working in bad weather is difficult,” Tanaka said. “[Evans] kept an eye on my guys, and the distance between [the Laintok] and our boat. I want to thank my crew and my other captain. If they weren’t with me, we couldn’t have saved people. We worked together. I would like to thank them all, for everything, from the bottom of my heart. »

Coral reefs, home to marine life, could be wiped out even if climate goals are met: study