BEIJING – Coral is the genie of the sea. In the 1960s, the classic opera Red Coral caused a nationwide sensation with its melodic theme song Ode to Coral, and the romantic lyrics, “Red flowers shine on the sea blue”, overwhelmed countless young people to appreciate the beauty of coral. .

As an integral part of the marine ecological system, coral reefs are nicknamed the “rainforests” of the ocean. However, in recent years, due to global warming, acidification, pollution and overexploitation, more than a third of the world’s coral reef ecosystems have been severely degraded.

Scientists have called on the public to protect corals. In some waters off China, corals are also facing a survival crisis, as the difficulty of large-scale artificial reproduction of corals is a global problem.

On the south shore of Taihu Lake in Zhejiang Province, the coral project research team led by Feng Qiwei, after more than 10 years of diligent work, has successfully solved the technical bottleneck of artificial breeding at scale of corals, in a controllable circulating water environment. . In 2021, the number of their live coral seedlings increased from around 8,000 to over 30,000, and the survival rate remained above 90%.

Feng Qiwei monitors coral growth. He treats these coral seedlings like his own children. [Photo by WU JIANXUN/FOR CHINA DAILY]

In this “coral factory”, the transparent glass tanks are aligned to form a closed and circulating water system. The blue light that filters through the water adds a touch of mystery. Tropical fishes of different colors, sea animals and plants such as corals and algae enhance each other’s beauty, presenting a colorful “underwater world”.

Feng, 35, is the inventor of this “microbial water quality treatment and cultivation technology” and the technical director of the artificial coral breeding project. Interestingly, he chose to conduct a large-scale breeding experiment in marine ecology near Taihu Lake and build a multi-level marine ecosystem through the symbiosis of fish, corals, algae and other micro- organisms.

“I liked chemistry in high school, so I majored in chemical engineering in college. Since I like playing games, I joined a game company to work as a designer. Ten years ago, after coming into contact with the coral, I was deeply drawn to this magical animal,” he says.

At that time, Feng realized the prospect of artificial reproduction when he saw coral protection information on the Internet. He embarked on the campaign to bring coral back to the sea through studies of artificial farming. In order to promote coral growth, researchers grind various nutrients into powders in a certain ratio and then feed the corals through ducts. [Photo by WU JIANXUN/FOR CHINA DAILY]

Out of love for corals, Feng and his team have tried new experimental methods over the years. They also sought advice from experts from the South China Sea Institute, the Chinese Academy of Sciences and Xiamen University to develop a set of advanced water quality treatment technologies. The symbiosis of microorganisms, involving carbon, nitrogen and phosphorus, provides the most suitable growth environment for corals to grow and reproduce rapidly. Now, Feng has made breakthroughs in artificial breeding technology for over 300 species of corals. Six key technologies, including modular coral farming devices, have obtained national patents. Planting a fingernail-sized coral seedling would, within a few months, result in a bigger coral clump. The coral is placed on a mobile base and the entire coral can be removed by pulling the base. The whole plant can be transplanted to the seabed with the base intact, to increase its stability and survival rate.

“Our goal is to cultivate corals in an artificial environment to improve their resistance to heat, acids and insects, and enable restoration and planting of wild corals on a large scale in the future,” Feng said. He hopes that the corals they raise will return to the sea, so that the underwater world where the corals grow will always be full of vitality. For the “blue dream” in his heart, Feng spent countless days and nights studying in the laboratory. [Photo by WU JIANXUN/FOR CHINA DAILY] 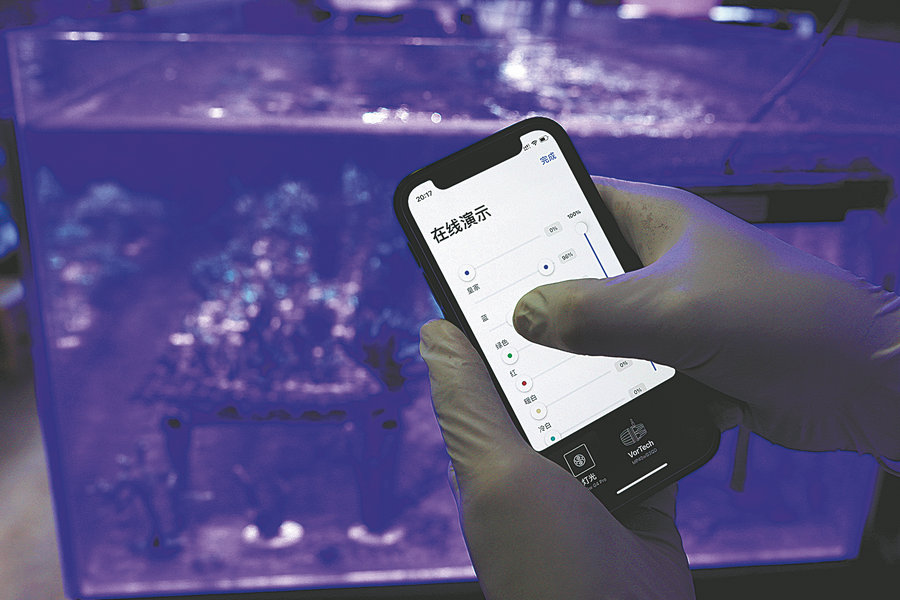 Feng’s two children are very interested in the underwater world. Feng hopes that the children will be able to see the corals he has planted on the bottom of the sea. [Photo provided to China Daily]