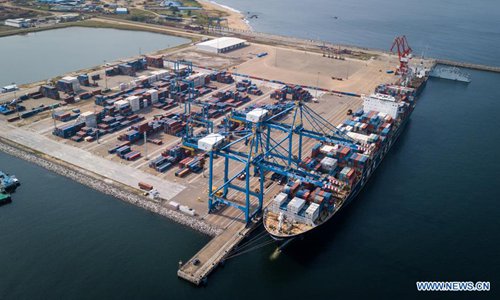 China Harbor Engineering Company (CHEC) said on its WeChat public account on Tuesday that it had won a tender for the construction of the eastern terminal of the port of Colombo, which aims to increase throughput and the role of the port as a transshipment hub in South Asia.

The new terminal is expected to be completed within 36 months. It will contain a 720 meter long quay and 600,000 square meter storage.

CHEC’s regional company in Sri Lanka hailed the deal as another major marine engineering project, along with the Hambantota Port Development Project, the Colombo South Container Terminal Project and the Jaya Container Terminal at the Port of Colombo.

The new dock project consolidates the company’s advantages in the field of marine engineering and also provides a solid basis for follow-up projects.

CHEC is a Chinese infrastructure giant and the builder of a number of world-class projects, including the Yangshan deep-water port in Shanghai and the Hong Kong-Zhuhai-Macau Bridge.

Car near the edge of Niagara Falls; the rescue team pulls the body of the vehicle