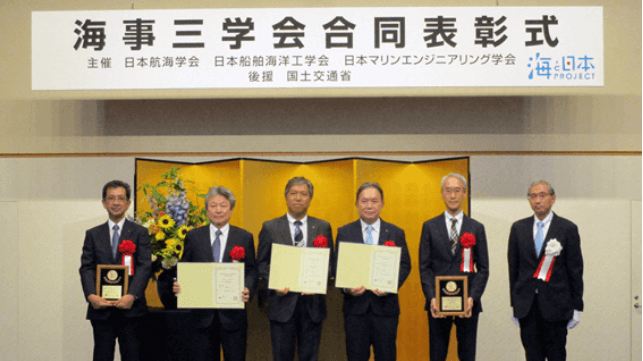 Carbon Capture on the Ocean (CC-Ocean) project conducted in cooperation with Mitsubishi Shipbuilding Co., Ltd., part of Mitsubishi Heavy Industries (MHI) group, Kawasaki Kisen Kaisha, Ltd. (“K” Line) and ? ClassNK received the “Marine Engineering of the Year 2021 (Doko Memorial Award)” from the Japan Institute of Marine Engineering (JIME). The award was received in recognition of the world’s first marine CO2 capture system on an actual voyage to successfully separate and capture CO2 from flue gases, with captured CO2 having a purity greater than 99.9%, achieving performance according to plan. The award ceremony was held on July 22 at the Kaiun Club in Tokyo.

This award, given for outstanding technical achievements in the fields of marine engines and equipment, offshore instruments and related marine engineering, aims to draw attention to the innovative character and significance of such achievements in Japan and around the world, and to support future progress. associated scientific and industrial technologies. The award-winning “CC-Ocean” project aims to capture CO2 at sea by converting an existing CO2 capture system for onshore power plants to a marine environment. The system was installed aboard the CORONA UTILITY, a coal carrier for Tohoku Electric Power Co., Inc. operated by “K” Line, with demonstration tests conducted for approximately six months beginning in August 2021. The quantity , the ratio and purity of the captured CO2 were all according to plan, demonstrating the feasibility of capturing CO2 from the combustion gases of marine engines on board ships, where operating conditions differ from those on land.

ClassNK participated in the assessment and verification of the entire project from a security point of view. The knowledge acquired through this project will be used to develop appropriate standards related to CO2 capture technologies to help reduce GHG emissions from ships.

The products and services described in this press release are not endorsed by The Maritime Executive.

Strand sanctions The crew of a Russian tanker off India